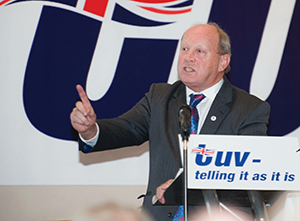 At the TUV’s party conference, party leader Jim Allister told delegates political events over the past 12 months have only vindicated and validated the party’s position.

Taking to the stage at the TUV party conference, party leader Jim Allister told party delegates that only his party can offer Northern Ireland the new vision and start it deserves. Reflecting on the crisis that engulfed Northern Ireland’s political institutions last autumn, Allister reminded delegates that it was the TUV who derided the pretence that the IRA had disbanded and were until recently the only ones who dared to say the IRA Army Council still existed.

Reflecting on Peter Robinson’s decision to retire, Allister claimed that it was “little wonder Sinn Fein MLAs gave Peter Robinson a standing ovation” in the Assembly Chamber as they have reason to be grateful to him. Turning his attention to the recently announced Fresh Start agreement, Allister lambasted it as a “a trade off in climb downs” noting how Sinn Féin climbed down on their pledge to resist welfare reform and how the DUP agreed to a deal without the re-establishment of the independent monitoring commission. “What a catastrophic failure Sinn Féin/DUP rule has been,” said Allister, “based not on a cogent plan for government but on a self-serving carve up.”

Looking at the major issues affecting Northern Ireland today, Allister reasoned that the Department of Enterprise Trade and Investment’s Minister Jonathan Bell was out of his depth if he really believed, as he claims, that manufacturing in Northern Ireland is not in a difficult position. Bell, according to Allister “watches Michelin announce its intention to close its Ballymena plant and awards a 30 bus contract to a Belgian firm.”

Northern Ireland’s energy situation was next in the firing line as Allister lamented the Executive’s “all-Ireland centric policy that has widened the gulf between Northern Irish prices and the rest of the UK.” He also criticised the fact that hospitals waiting lists are “again out of control and money is running out.”

There was further criticism for the DUP’s decision to veto Allister’s Bill to reduce the number and salaries of special advisors. The DUP, Allister claimed “though boycotting debates on waiting lists, cancer and autism, rushed back into the chamber to join with Sinn Féin to block the Bill.” This, coupled with the fact that Emma Pengelly MLA kept her publicly funded golden handshake even though she walked into another publicly funded position just three weeks later, highlighted, in Allister’s eyes, the fact that greed and squander are alive and well in Stormont.

Turning his attention to the upcoming election, Allister was clear in his determination to increase the number of TUV MLAs sitting in Stormont and stressed his party’s desire to deliver a “positive vision of voluntary coalition and vibrant opposition as the path to durable devolution.” Speaking to Northern Ireland as a whole, Allister asked voters to ask themselves if they are truly happy with what they have, and if not, urged them to vote for the TUV in May.

“Last year, Henry Reilly, whom we’re delighted has come to strengthen our team, and I had 100,000 votes between us. Those 100,000 voters can guarantee Stormont will never have to be the same again,” said Allister. “By voting TUV next May,” said Allister, “You’ll be heard the loudest and best. That is the vote that declares enough is enough.”