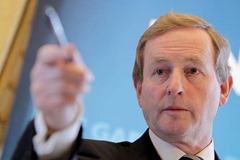 An Taoiseach Enda Kenny explains how the state visit opens up a platform for stronger British-Irish links.

The strength and transformation of British-Irish relations today has never been more apparent than in the recent state visit to the United Kingdom by Uachtarán na hÉireann. This visit brought new light and new life to relations between our countries and just like Queen Elizabeth’s visit to Ireland in 2011 represented a fantastic platform from which to begin to build the next phase of the relationship; President Higgins’ visit opened new doors for both nations to take our relationship to the next level.

In March 2012 Prime Minister Cameron and I were intent on building on the success of Her Majesty’s visit in 2011 and that is why we agreed a new and important joint statement on British-Irish relations which set out a vision of closer co-operation between us for the next decade.

The joint statement has since been translated into concrete results. For example, we published a joint economic study identifying further areas for co-operation and we had an innovative joint trade mission to Singapore – the first of its kind and hopefully the first of many. We are also making excellent progress on introducing a reciprocal short-stay Common Travel Area visa later this year.

Prime Minister Cameron and I also agreed to convene annual summits to jointly oversee progress at the highest political level. We had our second annual summit in Downing Street last March.

Bilateral engagement continues between our administrations at the highest level across a variety of policy areas. Since March 2012, there have been two plenary meetings of secretaries general and permanent secretaries (overseen by the Secretary General to the Irish Government and the Cabinet Secretary). The first was held in November 2012 in London and the second in September 2013 in Dublin. These meetings allow for an assessment of progress and the mapping out of a future work programme in a number of areas as set out in the joint statement over the short to medium term.

This arrangement, involving such extensive structured engagement at the highest official level, is unique in both administrations.

Queen Elizabeth aptly captured the status of our relationship at the state banquet in honour of President Higgins when she said that this fresh spirit in Anglo-Irish relations is helping both countries economically. This message was reiterated throughout the visit. The importance of British-Irish economic relations was emphasised through an array of statistics highlighting the interdependencies which exist between our nations. The fact that we trade over €1 billion worth of goods and services between us every week displays the enormity of our trading relationship.

Of course our relationship encapsulates so much more than economic development.

Our two countries enjoy immensely close and interwoven ties in areas such as culture, arts, sport, politics, education, science and, above all, deep and intimate family ties.

Northern Ireland perhaps best represents our interwoven ties. While the situation in Northern Ireland is not without its fragilities, there has been huge progress in recent years. All parties have to stay focussed on the prize of enduring peace and I very much welcome the recommencement of party leader talks.

Prime Minister Cameron and I remain resolutely committed to working together, including in supporting the Northern Ireland Executive and Assembly, in pursuit of greater and lasting peace and prosperity for the people of Northern Ireland.

The two governments will continue to work closely to support the Northern Executive and political parties in addressing the challenges and in pursuing every opportunity for a stronger economy, more jobs and a better society.

The current level of interconnection and collaboration between our two countries allows us to conclude that the balance sheet for British-Irish relations is overwhelmingly positive and we intend for this to remain the case in the future.

It is clear to me that the extent of ongoing co-operation is clear evidence that the close, neighbourly relationship between Ireland and Britain continues to grow and flourish at all levels. The state visit has only reaffirmed in my mind the endless possibilities for co-operation in the years ahead.