Northern Ireland’s inability to match the levels of educational attainment of its population to the needs of the modern economy is a major factor in its poor economic growth, argues economist John FitzGerald.

The ESRI’s John Fitzgerald believes that poor economic performance can be related directly to underinvestment in education and selection of pupils within the system.

“A failure to invest effectively in education is crucial in Northern Ireland’s poor economic performance within a UK context,” he says, adding: “The selective nature of the educational system does serious damage to the economy and society and the challenge will be how best to rapidly evolve to a more inclusive system.”

Underlining the link between education investment and economic output FitzGerald highlights labour market data from the EU15 which shows a low elasticity of substitution between skilled and unskilled labour. “It’s recognisable that a failure to match labour supply and demand leads to unemployment,” he explains.

Statistics over the last 15 years highlight that, even during recession years, the employment of graduates has continued to grow and the unemployment gap remains small. This is in contrast to figures for those who did not complete secondary school for the same period.

Northern Ireland currently has the second lowest participation rates at 17 across the UK and Ireland, second only behind Wales and the model of grammar and secondary schools has changed little from the model established under the 1947 Northern Ireland Education Act. In contrast, England modified its model in the 1960s and in the 1980s, the Republic of Ireland changed its policies on the back of research which highlighted the negative impact streaming was having on less talented pupils.

Research carried out by Borooah in 2015 highlights the serious disadvantage being placed on the remaining 60 per cent of pupils in Northern Ireland when 40 per cent were selected in to grammar schools.

FitzGerald says: “Scotland’s performance is no accident. The Scottish system of education involves mixed ability teaching and Government policy has given greater attention to education than much of the rest of the UK.”

FitzGerald believes that Northern Ireland’s economic problem is compounded further by the fact that almost 25 per cent of its graduates are living in England and Wales, compared to just of 8 per cent of Irish graduates doing the same.

“Northern Ireland is not producing enough graduates and, of those that there are, a large number go to the UK,” explains FitzGerald.

In 2017, 19 per cent of Northern Ireland’s first year students were in third level institutions in Great Britain and statistics suggest that two thirds of those studying in England or Scotland do not return to work in Northern Ireland.

FitzGerald says that these figures are evidence that Northern Ireland is “losing at both ends of the educational system”. Explaining this further, he says that human capital affects the economy through three key channels: productivity; labour force participation; and the reduced probability of unemployment.

Highlighting a range of studies done in Ireland which all point to a major contribution to Ireland’s economy over the past 20-30 years being the upgrading of human capital, he points to one in particular by Breen and Shortall, 1992, which showed that keeping children in school so they completed the Junior Cert, exam, not only reduced the likelihood of unemployability, but also brought about savings to the State in reduced unemployment benefit.

FitzGerald also points to his own research paper looking at the contribution of rising educational attainment to growth between 1992-2010 which estimated that 2.5 percentage points of the annual growth in the Republic of Ireland can be attributed to the upgrading of the educational attainment of the population. 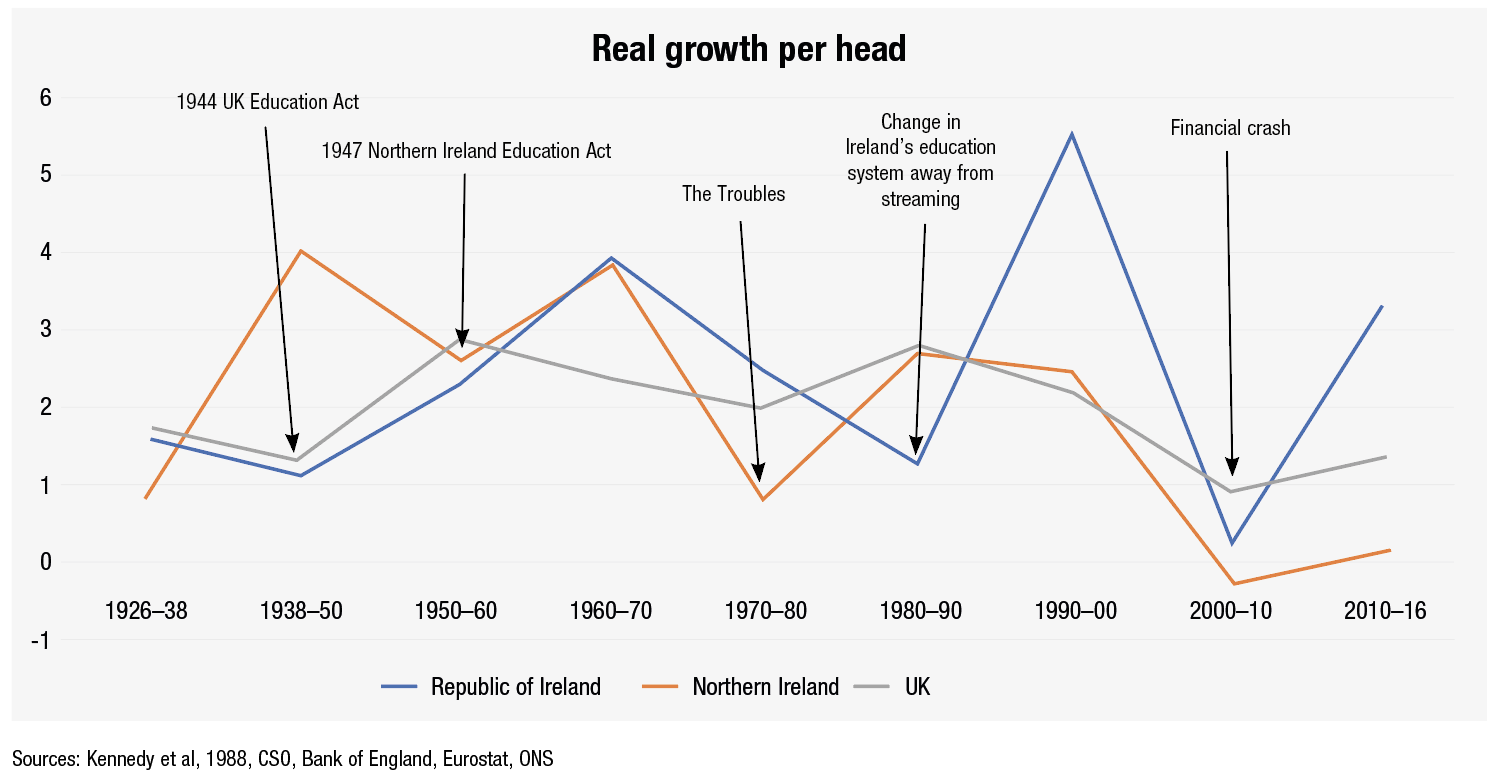 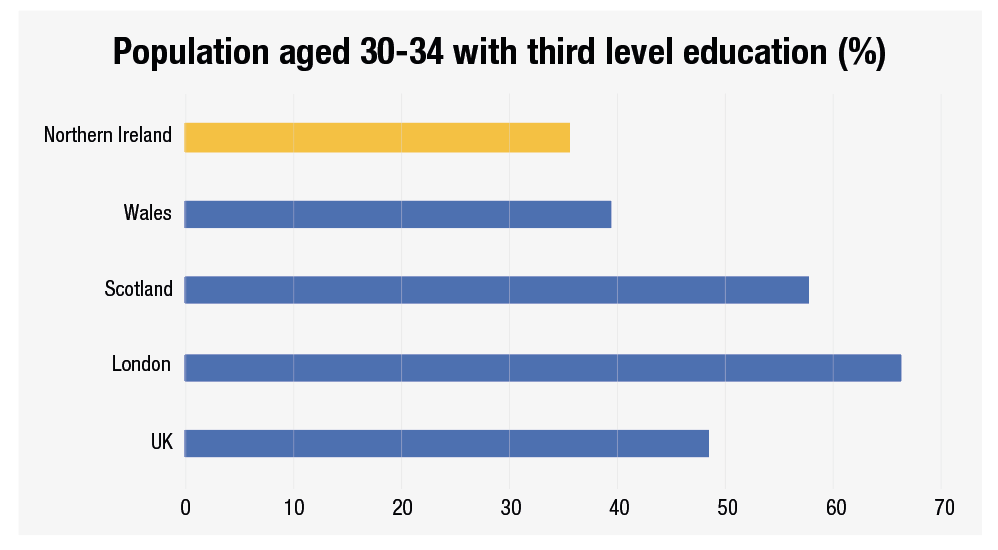 A similar study focussed on Northern Ireland by Borooah estimates that upgrading education would bring about better returns for the individual and add 0.25 percentage points to productivity growth.

A 2019 study by FitzGerald estimated that if Northern Ireland was to adopt the Scottish education system, it would add 1 per cent a year to growth and another 2019 study by Siedschlag and Koecklin pointed to a significant impact of education on foreign direct Investment (FDI).

FitzGerald says: “In the Republic of Ireland investment in education has played a crucial role in growth. Inclusive education is a vital tenet of this and that does not simply mean third level education. Much of the success in recent years can be attributed to a policy focus on reducing early school leaving and that change in perception that education was important and plays a big role in growth rates.”

The academic believes that reform of the education system in Northern Ireland today would take some 20 to 30 years to impact on the economic performance. However, he believes there is an existing quick win measure that could take earlier effect. He suggests that Northern Ireland should make itself attractive to those young people who have emigrated, highlighting that a factor in Ireland’s success is that while over one third of all graduates leave Ireland, a large number also return, unlike Northern Ireland.

ESRI research suggests that those who return to the Republic of Ireland earn 10 per cent more and increase their productivity by 10 per cent as a result of their learnings abroad.

“Attracting back a large number of graduates could have a major economic impact,” he says.

FitzGerald also believes that Northern Ireland needs to transform its investment in education to sustain real growth, however, he also recognises potential challenges to such a policy switch. Recognising the rise of English nationalism which is culminating in the form of Brexit, he says: “Northern Ireland faces huge economic problems which will be aggravated by Brexit, however, economic problems alone are not the only challenge.

“Education is the sector in which I would begin this transition,” he concludes.