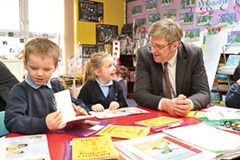 While the Education Authority is less ambitious than ESA, political agreement on the reform represents a positive step. Michael McKernan reports.

In September of this year, Education Minister John O’Dowd – recognising a lack of consensus around the Executive table – decided to set aside his more substantive Education Bill containing, among many reforms, the proposed Education and Skills Authority (ESA). Instead the Minister obtained Executive approval to draft a more modest Education Bill which proposed, simply, to amalgamate the existing five education and library boards (ELBs) including their staff commission, into one single Education Authority.

The second Bill would set up the new Education Authority with identical functions to the ELBs it was replacing. There was to be no enhancement of responsibilities. Apart from providing scope for the funding of a new support body to assist the controlled sector, the six-clause Bill contained no other noteworthy structural reforms.

Indeed, the Minister acknowledged that the principal benefit of the new Bill would be the achievement of cost savings through the elimination of duplication in ELB corporate functions. It was also expected that the new unified body would find it easier to structure itself to align with the boundaries of the 11 new super-councils, due to take over full local government responsibilities in April 2015.

The Bill went through the Assembly under the accelerated procedure (which bypasses detailed committee scrutiny) and reached its final stage on 17 November. During its passage through the House, a number of detailed amendments were tabled by the parties at different stages. Perhaps surprisingly in the present political climate, many of the amendments were supported by the Minister or redrafted by agreement following behind-the-scenes negotiations between the relevant parties.

However, one set of amendments from the Alliance Party – aiming to impose a duty on the new Education Authority to promote integrated education – was supported by the SDLP but heavily defeated (76-21) in the final consideration stage vote. At the same time the Assembly, with the support of the Minister, did agree to a similar duty on the authority to “encourage, facilitate and promote” shared education, although the Minister got agreement to defer commencement of this provision until such time as a reliable legal definition of ‘shared’ could be established.

In a similar vein, the Assembly agreed to an amendment from independent MLA John McCallister to impose a duty on the new Education Authority to promote greater “community use of premises of grant-aided schools”

Most of the other amendments related to the composition of the membership of the new authority. Although there was some disappointment that the authority would not have members drawn directly from the community (four places had been proposed originally by the Minister) or directly from the teaching profession, a final compromise was agreed which ensured that all the main sectors had representation.

In the end, it was agreed that the 21-strong authority would have:

• four representatives of the controlled sector;

• four representatives from the maintained sector; and

• one representative each from the voluntary grammar, controlled grammar, integrated and Irish medium sectors.

Overall, the Education Bill passed through the Assembly in a matter of six weeks. Notably, amendments were debated in a relatively restrained manner borne of a general understanding that since the Bill was primarily about capturing efficiencies, it should ultimately go through. The final Bill is a modest reform relative to what education ministers over the last decade have been targeting. Nonetheless, for the Assembly at a time when Stormont it is subject to increasing criticism, it represents a genuine accomplishment. The Education Bill received royal assent on 11 December.