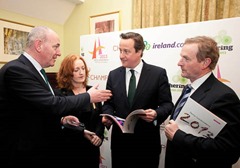 In the first of a series of interviews with Northern Ireland MPs, Mark Durkan talks to Peter Cheney about his impressions of Westminster, including the changing nature of the whips and backbench politics.

After eight years in Parliament, Mark Durkan often finds himself having an indirect influence on how other local MPs vote as well as putting forward the SDLP’s proposals.

Typically, he would be listening to a debate in the chamber and would then brief other local MPs who come down when a division is unexpectedly called.

“I will try to give people a quick ‘policy sat-nav’ from their starting point as to what the issue is and they make their own choice,” he quips.

Durkan had some experience of Westminster as John Hume’s parliamentary assistant between 1984 and 1998. “I still found it strange and big when I got there,” he says of his arrival as an MP in 2005. Many of the procedures had changed since 1998 and like most new MPs, he went through a time of “education by tripwire”.

He and fellow newcomer Alasdair McDonnell were guided through the system by SDLP veteran MP Eddie McGrady but “the weight and rate of legislative business” was considerable. At an early stage, Durkan was “very conscious” that a full dual mandate would pose difficulties.

He had been an MLA for Foyle since 1998 and SDLP leader since 2001 but stepped down from both posts in 2010 to concentrate on Parliament. Westminster was initially the focus for all Northern Ireland policy as the Assembly was suspended. Durkan wanted to make sure that some policy areas were kept for Stormont “because devolution was the more appropriate way of dealing with those.”

The Northern Ireland (Offences) Bill, which would have pardoned ‘on-the-runs’ wanted for offences during the Troubles, was Durkan’s first major parliamentary battle. Sitting on the Bill committee was an unusual move for a party leader but he was “absolutely committed” to stopping it.

He maintains that the SDLP was the only party that was “truly opposing the Bill with the aim of stopping it”. Peter Robinson thought that Durkan was “investing an awful lot of political capital” in this and believed that it couldn’t be stopped. The DUP therefore expected the Bill to pass and, through the committee debates, sought to place the blame on the Ulster Unionists.

Sinn Féin had backed the legislation but voiced its opposition after it became clear that security forces personnel, as well as paramilitaries, would be pardoned. The Government withdrew the Bill in January 2006.

The “smooth and almost arrogant dominance” of the Government whips disappeared after Tony Blair’s departure and “things didn’t run as surely or smoothly” in the Brown era. The 2010 Parliament “brought not just the novelty of coalition but also quite a new intake of MPs,” he remarks. 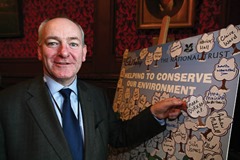 Durkan finds them better at challenging government and voicing the interests of constituents, and thinks that they “set out a better reference standard” for how backbenchers can represent constituents in the future.

The flag protests have undoubtedly influenced how Northern Ireland is viewed at Westminster.

Many MPs, he says, had the following assumption: “That’s done, that’s sorted. We’d just like to get the nice postcards of positive photo opps that are coming from Northern Ireland.” The Queen’s visit to Dublin and her handshake with Martin McGuinness were regarded as “further confirmation” of progress but then “all of a sudden” the flag dispute flared up.

“They saw that as something that had come from within the political system itself,” he states. This was different from dissident republican attacks which could be rationalised as a “residual violent challenge” to the political process. MPs were responding “just out of genuine bewilderment” rather than condemnation.

That impression has not changed over the following months. Members are “still interested, still concerned and not complacent” but their interest is often superficial due to their heavy workload from their constituency work and other policy interests.

Irish nationalism in Westminster can trace its roots back to 1830, when Daniel O’Connell took his seat. It has been present since then except for an absence between 1955 and 1966.

Asked how the SDLP approaches Parliament, Durkan says: “We’re there to do a job because it’s a democratic theatre of governance. Westminster affects life here.” As a nationalist party, the SDLP wants to see “far more” powers devolved to Stormont and its ultimate goal remains “parliamentary sovereignty vested in a parliament for the whole of the island.”

Influencing Parliament’s agenda is “not easy” with only three MPs out of 650. The SDLP sees itself as “getting stuck in rather than getting sucked in” to interesting but irrelevant policy debates.

The party disregards a Bill which only covers England unless it is “predictive legislation” that could eventually influence the Assembly. Other English-only issues have budgetary consequences through the Barnett formula and “we’ve a right to stake our vote in there too.”

For example, the Water Industry (Financial Assistance) Act allowed for the investment of public money in infrastructure and would therefore affect how Barnett worked. This change of policy also helped the Executive’s case for refusing to privatise Northern Ireland Water.

SDLP MPs receive the Labour whip but “we don’t always take it or accept it.” The SDLP therefore knows in advance how Labour is approaching the Commons agenda. Liaising with its sister party before the whip is sent out helps to gain “intelligence” about forthcoming business.

“It’s an easier relationship in opposition than it was in government,” he comments as government whips were wary of how the SDLP could swing Labour backbenchers. 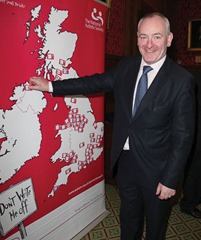 The “vehemence” of the party’s opposition to the Northern Ireland (Offences) Bill surprised the whips but they were “actually glad” that it was withdrawn as they feared a backbench rebellion.

On 42-day detention in 2008, the party’s stance persuaded some Labour backbenchers to oppose the Bill or abstain on the second reading. The measure was passed with the help of DUP votes but overturned later that year in the House of Lords.

In the current Parliament, the SDLP voted against the Welfare Reform Bill but the Labour whip did not oppose it. To Durkan, this is an example of “wedge politics” to gain support from middle class voters. Labour was also open to criticism as it had already taken several welfare reform bills through Parliament.

The Scottish National Party and Plaid Cymru have a joint parliamentary group but the SDLP is not involved. “I’ve no particular view on what’s better for Scotland or for Great Britain, in terms of the Scottish referendum or anything else,” Durkan responds.

He notes that the SNP and Plaid both want independence from Westminster but adds: “So long as the constitutional affairs of Great Britain [don’t] interfere with me, I have no wish to interfere in their affairs.” While he aspires to Irish unity, he is not committed to the break-up of the whole of the UK.

That said, the SDLP does work well with the Scottish and Welsh nationalists on common interests. Likewise, it has some common ground with the DUP, Sylvia Hermon and Naomi Long.

The SDLP receives ‘minority whip’ information through the DUP as it is the largest minor party in this Parliament. This is used to notify the minor parties that a seat is available on a Bill committee, and they can then discuss who should take that up.

Minor parties hold 23 seats in the Commons and are alternately considered or “forgotten” as a whole group. They were left out of discussions on the Leveson report but co-opted into talks on tightening up parliamentary expenses.

The local MPs do work together to bring a Northern Ireland “accent” to debates or to remind the House of the differences between Britain and the province. “On some of those things, we have common cause. On other things, there might be a common cause but we are bringing different emphases,” he relates. Where the parties differ, they try to avoid stand-offs in the House as “airtime” for such a small region is in short supply.

Mark Durkan expects that the Executive and UK Government can resolve their differences over allowing the National Crime Agency (NCA) to operate here. He supports its scope but wants all NCA officers to be accountable to the Policing Board under the Patten arrangements.

The SDLP’s main objection is that the NCA will be given constabulary powers, meaning that its officers could operate as a second police service beside the PSNI. This brings up parallels with the old Ulster Special Constabulary, which was disbanded in 1970, and the variety of security force agencies operating during the Troubles.

“Having established something and gone for it,” Durkan says of Patten, “we of course want to ensure that we’ve protected the integrity of that model without compromising the ambition that other people have to be more effective, more robust and more joined up.”

In Durkan’s view, Parliament is “sleeping in” on how the business of banking is changing in Northern Ireland. The sector is “changing by default” with the changes in the Republic, the proposed euro zone banking union and the regulatory changes from London. This will also affect other financial services, including insurance firms and credit unions: “We have to try to get some say and to get some ‘shaping say’ on those things at Westminster.”

Durkan has been the minority party representative on the two banking bills passed since 2010. His questioning on how those bills would affect Northern Ireland encouraged other MPs to ask about the impact in their regions. He also tested Labour amendments which seemed to create “uniform absolutes” for large British banks but were “absolutely disproportionate” for small credit unions in Northern Ireland.