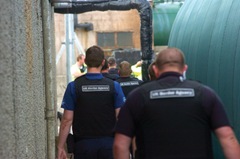 Immigrants who break their visas may soon be held at Larne. agendaNi follows the proposal’s progress.

A final decision by the Planning Service on the conversion of an unused custody suite at Larne police station into a holding centre for immigration detainees is expected in the next few weeks.

The project would see the existing custody suites being used to hold up to 22 adult ‘immigration offenders’ for one week and an extension built on at the back of the site for showering, catering and exercise facilities.

The UK Border Agency’s Assistant Director for Northern Ireland, Mike Golden, updated agendaNi on why the facility is needed in the region.

“At the moment we have to hold people in police cells,” he said. “The UK Border Agency has been considering the provision of a short term holding facility in Northern Ireland, capable of holding detainees for up to seven days and we recently submitted a planning application for a 22-bed facility in Larne where the accommodation and facilities will be far more suitable for immigration offenders.”

Golden continued: “Detention remains an essential element in the enforcement of immigration control, where people refuse to leave the UK voluntarily.

“The short-term holding facility at Larne will be used for adult immigration offenders who are being removed from the UK. Plans include discrete single rooms for males and females.”

People whose removal is not possible within seven days of their detention will be transferred to one of the 10 immigration removal centres in England and Scotland “where amenities more suited to longer periods of detention are well-established, including computer access, organised workshops and educational activities,” Golden added.

When Larne Borough Council found out about the plans in the summer, it asked for a decision to be deferred by the Planning Service. The council and the district policing partnership then held meetings with the Border Agency and the Policing Board which owns the Larne station.

Locals had voiced concerns about the aesthetics of the facility, such as initial plans to have higher fences with razor wire and more lights. When lobbied on these issues, the agency agreed to amend its plans.

Larne Mayor Andrew Wilson told agendaNi that because there was no consultation with the council, prior to the Planning Service discussing it in September and recommending that the facility be approved, “an information vacuum” was created and “was filled by rumour and misinformation.”

Wilson concluded: “I am due to meet human rights lawyers from the Refugee Action Group. However, the wider issues of the need or otherwise for a temporary holding centre for illegal immigrants in Northern Ireland is a policy issue which our MPs and MLAs need to get a grip on.”

In September, East Antrim MP Sammy Wilson welcomed the proposal to base the holding facility at Larne.

“It is important that we have centres like these across the country so that detainees can be held and properly processed,” he said.

Sammy Wilson added: “If these were not in place it would mean that many illegal immigrants could not be held but would have to be released and could go off the radar of the authorities. I look forward to getting more information about this application from the Home Office.”