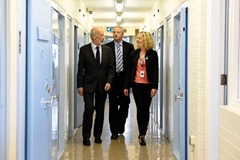 In a wide-ranging interview, David Ford discusses the main challenges facing the justice system with Peter Cheney and outlines some of the lesser-known good practice being developed across the system.

Present day budgets and dealing with the past will combine to make 2015 a particularly challenging year for the justice system, David Ford predicts. Alongside spending cuts, the department has also been tasked with drawing up policies to implement the new commitments on the legacy of the Troubles.

The draft Budget would have allocated £1.5 billion to the Department of Justice for 2015-2016. This was increased to £1.7 billion in the final Budget but a large part is annually managed expenditure (£566 million) or ringfenced for the PSNI’s counter-terrorism operations (£49 million). Annually managed expenditure includes legal aid and compensation payments. The non-ringfenced resource budget faces a 4.1 per cent cut in the coming financial year.

“Up to now, we have largely managed to protect the front line,” he explains, “by taking very significant cuts in the core department.” This will continue but the reductions will now need to extend to the rest of the system. “I gather there’s one response in to the consultation which effectively tells us to protect every area of spending,” he comments. “Well, that’s a lovely idea but it simply isn’t practical.”

Most of the budget is passed on to arm’s length bodies, which are in turn responsible for setting their own financial priorities. The PSNI receives 71 per cent of resource expenditure and therefore will face a major reduction. The Minister has sought to protect the probation budget as much as possible, as its work directly protects society, but further reductions will be required in the prisons budget at a time when prisoner numbers are increasing.

“It simply isn’t possible to protect everybody,” he says of the overall budget. The system, though, has a responsibility to protect everyone physically. On that point, Ford notes that “extremely good work” by the PSNI has delivered “very high confidence levels in policing” which compare well with police performances in Britain and the Republic.

He adds: “What we have seen is extremely good work done by the police in recent years in keeping the pressure on those who would seek to continue a terrorist campaign – with some very significant and positive results – but it’s a very expensive service to provide that overall security and well-being to the community.” 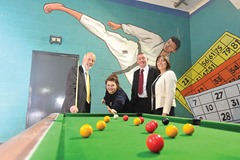 The justice system, David Ford notes, is often unsuccessful at sharing stories about its achievements.

“You can’t record the success of a police operation which might be quite expensive and stops something bad happening,” he explains, “but you know all too well what happens in the media if something bad does happen.”

Ford is keen to highlight how, over the last year, the department has introduced ‘registered intermediaries’ to help particularly vulnerable people – perhaps with a learning disability – to put across their version of events. Requests for this service come through daily and, in one case, prosecutors said that it proved essential in getting a conviction.

“We got a dozen volunteers in to do that work,” he remarks, “and then you suddenly realise that effectively each of them has a case every fortnight. And it’s not just a matter of one visit. It could be several police interviews. It could be potentially accompanying [the person] to court. So that’s a very significant commitment and it’s making a real difference to that small group of vulnerable people.”

The Minister also cites the single point of contact for victims and witnesses as another success along with the removal of under-18s from Hydebank young offenders’ centre, and ongoing work to help adult prisoners keep in touch with their families and tackle drug addictions.

Some of the policing and community partnerships have been effective in educating young people about the dangers of crime and anti-social behaviour and Ford wants other partnerships to improve their performance.

The ability to give written personal statements to the court is giving victims “a greater feeling that they are being listened to.” Ford comments: “Too often in the past, the victim was the person who stood up in the witness box, gave evidence and was then discarded while the system dealt with the perpetrator.”

While the overall level of crime is decreasing, recorded violent crime is increasing. The number of those offences went up from 28,953 to 32,403 over the last decade.

Asked how the department is responding to that trend, Ford notes firstly that violent crime is relatively low in the province. He adds that tackling low level offending by young men can stop them from “getting into a spiral of crime … but tackling those most difficult cases is just an ongoing challenge to the Police Service in particular.”

Dame Anne Owers’ prison review team published 40 recommendations for prison reform in February 2011 – and 34 of these had been completed by the end of 2014. “That’s pretty good going,” Ford quips. The official reform programme ends in April and progress will be evaluated in the autumn. It has covered a wide range of issues – from staffing to healthcare – but has continued “relatively quietly.”

A women’s prison is one of the main outstanding items. This will include a small high security unit but most parts of the prison will have a less strict regime. The facility is due to be built at Hydebank and the timescale depends on the department’s final budget.

The female prison population is small (around 60) but has a variety of needs. Ford adds: “In the case of many women – more so than men – we’re talking about dealing with people who have social problems and mental health problems which are as much as about getting treatment as they are about providing custody.” 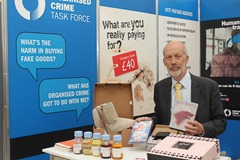 Some civil cases are “overly lawyered” and he recalls how the number of solicitors (and barristers) assigned to family disputes has increased over the years. Ford continues: “In many of those areas – whether they be family disputes [or] some neighbour disputes even – there’s more likely to be a commitment to a solution and an engagement with a solution which doesn’t damage relationships if we’re talking about some form of mediation.”

In an adversarial system, lawyers are paid to aggressively argue for each side and the judge is the “remote figure” who must make the decision. The department will be considering how NGOs can help to provide more advice and mediation services.

Asked whether cuts could compromise the quality of justice, Ford replies: “Absolutely, that’s what lawyers would say is currently happening in England and Wales. I believe that we have a long way to go before we would be in anything like as difficult a position as they are.”

He pledges that he will only restrict legal aid if there is an alternative way of accessing justice e.g. alternative dispute resolution. In his view, though, Northern Ireland cannot maintain its current system and times are changing.

Ford reflects: “If somebody says that the lady in a small village in County Tyrone expects to have a solicitor in that village, that may well be the case, but you’ll almost certainly find that she goes into the nearest town to buy her groceries in a large supermarket. Business models may have to change. That’s the reality.”

Ford is clearly frustrated by the slow speed of Stormont’s legislative process. While there was a rationale for bringing in “maximum possible consultation” after the Good Friday Agreement, he thinks that is now “damaging confidence” by taking up too much time.

He’s pleased that, for the victims and witnesses strategy, the department did the initial policy work and then allowed the Assembly’s Justice Committee to carry out the consultation. The process was therefore speeded up and the public still had its say.

The number of interface barriers has been reduced from 59 to 53 since the devolution of policing and justice. Ford has also turned down requests for new barriers. At 42 of the remaining interfaces, there are formal arrangements to build confidence on both sides with a view to eventually removing them.

Practically, this involves CCTV, improved street lighting and longer opening times for gates but he sees no value in setting an artificial deadline: “We’ll remove interfaces successfully when we’ve built the public confidence and that’s undoubtedly what’s been happening in some places.” Much of this work happens quietly and the department sees itself as “happy to assist” in this process.