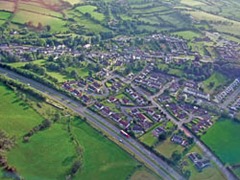 The dividing line between town and country is not always clear-cut.

While the heights of the Mournes and the lakes of Fermanagh are unmistakably rural, the boundaries between town, city and countryside are not always clear. Leafy suburbs, such as those between Holywood and Bangor, are on the border lines.

The question of whether an area is rural or urban is not just a semantic one. “Rurality” is a factor when health and social care services are being planned and different types of grants are available in rural and urban areas.

The current descriptions were set down by the Northern Ireland Civil Service’s urban-rural definition working group in 2005. Urbanisation, it noted, was a relatively new trend in Irish history. Most towns before the Plantation were built around castles and monasteries. The number of towns then grew with Belfast becoming the most successful. The proportion of Ulster’s population living in medium towns or larger settlements (each having over 10,000 residents) increased from 2 per cent to 36 per cent between 1821 and 1926. The most recent percentages, from 2001, show that 60 per cent of Northern Ireland’s population fell within that category, 13 per cent were in smaller settlements and 27 per cent lived in the countryside.

The Department of the Environment uses ‘settlement development limits’ to protect the character of settlements and prevent urban sprawl.

The most striking difference between urban and rural at the edge of the Belfast greenbelt, which was first laid down in the 1962 Matthew Plan. A householder living in the outskirts of Holywood may find themselves part of the Belfast Metropolitan Urban Area while their immediate neighbours are considered rural.

However, in reality, this is not a prescriptive definition. The group recommended that departments and other organisations should consider defining urban and rural in ways which are appropriate for specific programmes and projects.

Castlederg, for example, contains enough housing and shops in order to be considered urban but is eligible to receive rural funding as it serves a large area of countryside.