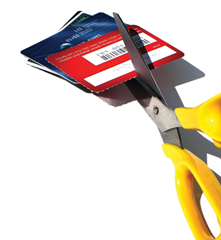 Personal debt is an increasing worry in Northern Ireland and many are finding that their finances are spiralling out of control. Emma Blee visits the Citizens Advice Bureau to find out the extent of the problem and the advice on offer.

With further spending cuts on the horizon, the Citizens Advice Bureau (CAB) is beginning to feel the tight grip of the recession.

The average waiting time to set up an appointment with an advisor is now around three weeks, whereas an appointment could have been set up within one week last year. The organisation dealt with more than £33 million of debt and helped around 2,500 people with financial problems in the last financial year.

Most people in the province are getting into debt by running up bills on credit cards, personal loans and mortgage debts. Credit card debt amounted to around 30 per cent of overall debt and almost 40 per cent of the number of debts. In 2006-2007 and 2007-2008, mortgage debt was £475,000 but this jumped to £4.5 million in the last financial year.

CAB is a charity and does not charge the client or the creditor a fee for the service to ensure impartiality. One of its main projects is ‘Dealing with Debt’, a contract with the Department of Enterprise, Trade and Investment, where the organisation provides face-to-face money advice across Northern Ireland. Another project is the “Beat the recession” website where anyone with a problem can talk to an advisor online.

Chief Executive Derek Alcorn notes: “We are getting a different type of client than we had been. People who wouldn’t normally have used the service, such as the more affluent, are getting into trouble with either their own business debt or personal debt.”

He explains that many people have ended up in very stressful circumstances when companies sell on debts to recovery agencies: “We’ve had cases where people have been getting phone calls or letters sent into [people in] a mental hospital. They are very, very aggressive and they ring night and day.”

With 31 main offices across Northern Ireland, the CAB offers advice to anyone with debt problems. While some people visiting the bureau have just one debt, it is more common that they will have four or five debts which have been run up over a few years.

“Their husband or wife many not know they have any debt and they will have been on the end of a whole range of phone calls and letters from companies harassing them. They sometimes come in with a paper bag full of letters and sometimes they are a bit more organised,” he comments.

Alcorn believes that the province’s debt problem stems mainly from a lack of education and knowledge. He would like to see educational programmes in schools so that people would be “educated to know about money and finance and how to deal with it”.

It is because of this, he remarks, that people don’t shop around for finance the way they would if they were buying other expensive items: “If you were going out to buy a fridge or a car, you would go to several different shops, you would look at different sizes and think about colour and then you would think about the best bargain.”

In his experience, many people don’t realise that while a loan from a building society will charge around 7 or 8 per cent interest, a store card could amount to four times that rate.

It is mostly significant life events such as divorce, redundancy or ill-health that drive people into debt, rather than carelessness, he comments.

When a client contacts the bureau a meeting is set up with a money advisor who works out an income expenditure statement that outlines the individual’s basic living costs. Alcorn explains: “The two things we prioritise within that are housing costs and utility costs. They keep a roof over their head and they are able to heat it.”

The advisor then writes to all of the creditors and discusses options such as repayment plans. The chief executive says the process is a lot cheaper than taking the case to court and creditors are often pleased to see the organisation involved.

It is also a positive step for the client as “it takes away a lot of the stress”, makes sure they still have enough to live on and “gives them back a bit of control”.

Alcorn predicts that the next three years will be “busier than ever” for the organisation as spending cuts will impact on people that are already in need. But as the CAB relies on funding from sources such as local councils and the Big Lottery, he remarks that they will “just have to cope” with the resources they have.

For anyone who is struggling with their finances, Alcorn suggests they talk to the lender as early as possible so that the problem “doesn’t end up getting worse”.

He adds: “The lender likes that because you are being honest with them and anything they do with you at that stage is much cheaper than taking legal action.

“I would also advise them to come and see an organisation like ourselves because we will not charge them for advice; we have no axe to grind.”