A planned increase in Northern Ireland’s housing supply will require a greater focus on the skills pipeline to ensure capacity exists in the construction sector to deliver on ambitions.

In April 2021, it was revealed that it could take up to two decades for housing supply to meet waiting list targets at the current rate in Northern Ireland. The need to dramatically increase housing supply to meet demand has been identified and a number of initiatives are underway which could help to address this, including the reclassification of housing associations, plans to equip the Housing Executive with borrowing power and the development of a housing supply strategy by the Department for Communities.

The building of new units alone is not the sole challenge facing Northern Ireland’s housing sector. A legacy of underinvestment in public housing means that much of the public housing stock is in need of upgrading, demographic changes will require an adaptation programme to ensure homes are fit for purpose and the climate change agenda means that mass retrofitting will be required to improve energy efficiency.

All of this work will require a construction sector with the capacity and skill to meet the demand. The readiness of Northern Ireland’s construction sector to meet future challenges is still undetermined. How the sector will emerge from the effects of the pandemic remain unclear. Recent statistics paint the picture of a rebound but in the context of it being one of the hardest hit sectors by the pandemic.

It would appear that while the level of demand should be there for the sector to grow in the coming years, a concentration must be applied to developing a talent pipeline to ensure a sustainable workforce exists. This must be done in recognition that Northern Ireland will not be the only jurisdiction where construction skills are set to be in high demand in coming years. Both the UK and Republic of Ireland governments have recognised the need to address skills shortages in construction if they are to meet ambitious growth plans.

Construction output in Northern Ireland has rebounded after the dramatic slowdown caused by the outbreak of the pandemic. The last quarter of 2020 saw construction output raise to a 10-year high and the sector registered as the only area with two consecutive quarters of growth at the end of 2020.

However, while the rebound is welcome, growth must be viewed in the context from which it has emerged. The second quarter of 2020, when restrictions were put in place, saw a 30 per cent drop in output from the same period the previous year and the initial response to the pandemic saw the largest quarterly and annual decreases on record. The rebound may have seen construction output increase by 10.3 per cent over the year but on a more accurate rolling four-quarter basis, it has decreased by 5.7 per cent. 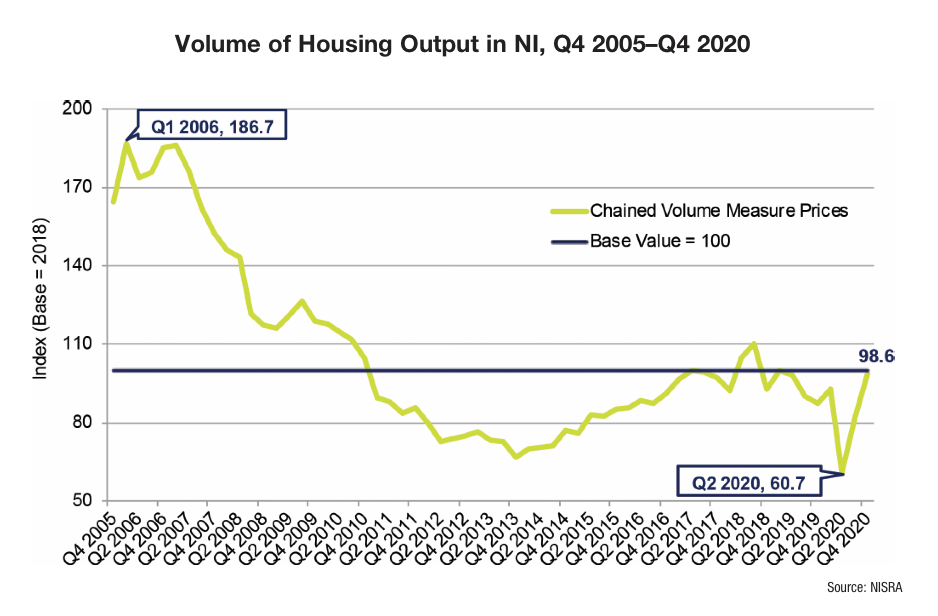 Encouragingly, the rebound has been driven by increases in new work (15.8 per cent) and repair and maintenance (15.6 per cent), however, whether these figures are a response to pent up demand or are sustainable long-term trends remains to be seen.

In Q4 2020, the largest sub-sector was housing, which accounted for 34.5 per cent of all construction output. This figure grew by 13.2 per cent when compared to the end of 2019 but was still 11.2 per cent lower on a rolling four-quarter basis. Housing output is currently almost half (47.2 per cent) what it was at the beginning of 2006.

The pandemic’s impact on the labour market is also currently difficult to fully analyse, given that government supports aimed at supporting employment remain in place, however, the latest employment survey paints a picture of rising unemployment across various sectors. At the end of 2020, the overall number of employee jobs across the labour market are estimated to have fallen by 1.2 per cent.

The construction sector accounts for around 5 per cent of all employee jobs in Northern Ireland. At the end of 2020, the number of jobs had fallen by 2 per cent compared to the previous quarter, however, this is in contrast to a 3.3 per cent annual increase over the year. For context, employment in construction in Northern Ireland is currently 24.4 per cent below those figures December 2007, right before the financial crash. The contrast of the quarterly decrease and the annual increase might be explained by the general slowdown of most sectors across the economy since restrictions were enforced, with those employees suffering job losses in other sectors switching to the construction sector where there was a recognised pent-up demand.

Northern Ireland’s construction sector performance is closely aligned with overall economic performance and it is understood that efforts to rebuild Northern Ireland’s economy will need to be underpinned by investment in infrastructure. Concerns around skills availability within the sector to meet an increase in investment is not limited to Northern Ireland alone. In March 2021, the Federation of Master Builders warned that the year-on-year decline in construction apprenticeships threatens the UK’s economic recovery and the ability to build back better from the coronavirus pandemic.

Across the UK, it is estimated that 3,000 fewer apprentices started in the first half of the 2020/21 academic year than in the year previous and the impact of declining apprenticeship numbers can be seen in a report for the first quarter of 2021. Of builders surveyed across key trades, 38 per cent reported a bricklayer shortage, 34 per cent struggled to get carpenters/joiners, 10 per cent recorded difficulties hiring general labourers and 9 per cent said getting plasterers had proven difficult.

Northern Ireland is developing a wide variety of new strategies which should see heavy increases in infrastructure investment, ranging from the Energy Strategy and Climate Change Bill, through to a Green Growth Strategy, a Housing Supply Strategy, and a review of the 2011 Planning Act. Additionally, a future Economic Strategy, the outworkings of the City and Growth Deals and any potential review of the Regional Development Strategy, will all have implications on investment levels and the capacity of the construction sector to meet these demands.

The Construction Industry Training Board (CITB NI), tasked with encouraging the adequate training of those employed or intending to be employed in the construction industry and to improve the skills and productivity of the industry in Northern Ireland, has outlined its belief that training within the industry is more important now than ever and have provided a range of supports during the pandemic.

Pre-pandemic, CITB NI had estimated a need for at least 2,500 new recruits to the construction industry over the next five years to meet an expected 0.8 per cent growth for the sector, however, it is widely acknowledged that these estimates will change as a result of recovery plans.

As the Department for the Economy seeks to finalise a Skills Strategy for Northern Ireland, crucial to meeting future demand will be not only supporting the construction industry to emerge from the pandemic but also fostering the skills to ensure capacity exists to meet growth plans.