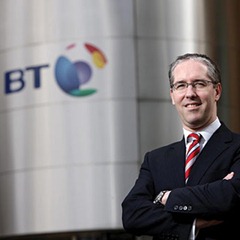 The combination of innovative public services and BT’s open access fibre network has put Northern Ireland in the European fast lane. What to do next is the big challenge, according to the chief executive of BT Ireland.

Many years working in the technology sector have not dimmed Colm O’Neill’s amazement at the scale and pace of change in the way people communicate. As chief executive of BT Ireland, he is regularly asked to speak at events and never fails to be astonished when he compiles the latest statistics around web usage and social media.

Online migration is staggering. In the eighteen months leading up to August 2012, facebook subscribers jumped from 500 million to 895 million; twitter accounts rose from 190 million to 465 million, and registered users at LinkedIn went from 80 million to 135 million. Even more staggering is how a global appetite for social media shows no sign of abating. O’Neill points out that start-ups like Instagram and Pinterest have come out of nowhere in the same period, acquiring million of users within months.

“People aren’t going to the web and social media; they’ve gone there, it’s happened,” he said. “And if you’re in business or the public sector, you have to go and meet them where they are.”

BT has been instrumental in facilitating a new wave of online interaction, particularly in Northern Ireland where 90 per cent of premises now have access to a fibre-ready network. That means fast and easy access to the place where people meet and do business. “The network is at the centre and enables everything,” commented O’Neill. “It is changing how we live our lives; the way we treat the sick and elderly; how we educate our children.”

BT describes it as “super-connecting” the region, facilitating online access that goes far beyond social media and into the very fabric of society. Northern Ireland is already a hotbed of activity, according to O’Neill, where the BT network is already enabling e-health services and digital education.

Taking public services online makes the public sector more efficient at the same time as letting citizens interact with government at a time and location that suits them. It is a process that BT has been closely involved in through its work with Northern Ireland agencies and government departments. Most recently it has been awarded a contract to help improve the public’s access to government services as the strategic partner for NI Direct, a programme that has attracted interest from public sector bodies around the world. 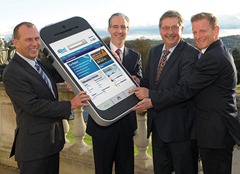 The NI Direct web site and contact centres for hosting citizen/government interactions started life in 2008 as a pilot project with anchor tenants such as Land and Property Services and the Planning Service. As the NI Direct Strategic Partner, BT will be responsible for working with NI Departments and Agencies to grow the number of transactional services available through the NI Direct website.

As well as developing services such as  making payments online, the BT, NI Direct partnership will help develop capability to manage grant eligibility and application processes as well as letting citizens locate their local government services in their own area. The partnership will also enable citizens  to interact with government through a wide range of communication channels, including telephone, web chat, e-mail, SMS text and social media services.

“Society is changing and our needs and expectations are changing with it,”  O’Neill said. “Our partnership with NI Direct will focus on increasing the range, usage and quality of digital interactions and services which deliver the greatest impact and efficiency for the public and departments.”

The combination of innovative public services and BT’s fibre network has put Northern Ireland in the European fast lane. Compare the 90 per cent of premises that have access to high speed broadband in the North with the 66 per cent that the whole UK hopes to achieve by 2014. This presents a whole set of other challenges. Leading from the front means that there is no one to copy: you become the trailblazer and innovator.

“The challenge is about unlocking people’s imagination, getting them to think of new and innovative ways to capitalise on high-speed connectivity,” said O’Neill explained. “One of the key barriers has been the technology to support new ideas. That barrier has gone. It’s now about stepping up to the mark and becoming visionaries.”

He has no doubt that the Northern Ireland public service is ready for the challenge having already embraced technology at every turn. Progress is already evident in key areas such as health and education.

“We know that delivery of healthcare in the home is cheaper than in a hospital and can give better outcomes,” he remarked. “Education doesn’t have to stop in the classroom. Pupils and parents can log in from home. Schools in more remote areas can access online lessons that they couldn’t previously attend because they didn’t have the class size to justify having a teacher.”

Another part of the challenge is bridging the digital divide and bringing everyone along on the journey. BT’s experience of the private sector would suggest that those most likely to embrace the technology do not always conform to stereotypes and pre-conceived ideas.
“There are small business owners, older men and women that you wouldn’t expect to be on the leading  edge, selling traditional products into global markets,  not the type of business you would expect to be technology enabled,” said O’Neill. “But they have discovered how high speed connectivity allows them to do business more efficiently and opens up new markets.”

Though O’Neill is optimistic about Northern Ireland’s ability to grasp the future and for the public sector to successfully innovate around new technologies, he urges citizens to be patient and understanding of the huge challenges.

“Doing anything new in the public sector can be risky and the public are very unforgiving of mistakes,” he concluded.

“As citizens, we should be more forgiving. What they are trying to do is not easy and they should be encouraged rather than criticised.”