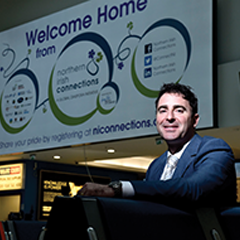 Andrew Cowan, Chief Executive of Northern Irish Connections, reveals the influence held by our diaspora around the world and the power that they have to drive investment and long-term economic benefits home to Northern Ireland.

For a small country we certainly know how to punch well above our weight when it comes to making a name for ourselves.
We are home to the world’s number one golfer and the world’s number one TV series. Belfast has been named as one of the Lonely Planet’s ‘Best in the World Must-See’ places and our high profile events, including the hugely successful City of Culture year held in Derry-Londonderry and the Giro d’Italia last year, really put our beautiful country on the tourist map.

While I could wax lyrical about the impressive scenery, talented sports people, A-list actors and recent event prowess, I choose instead today to focus on the success of Northern Ireland’s diaspora in the business sector and the power that holds for our country as we continue to seek out economic opportunities.

Northern Ireland has produced some of the world’s leading business people and in boardrooms across the globe, there are high flying individuals with connections to our region, wielding significant influence within their own business communities.

We need look no further than NI Connections’ ambassador Jim Clerkin, whose career has taken him from growing up on a small pig farm in Rostrevor to the top position of president and CEO of Moet Hennessy US, a company which produces revenues of $1.8 billion.

Or Mark Goldstone, CEO of Medikly, who practiced pharmacy in London before a dramatic career change led him to set up his own healthcare copywriting agency. Thanks to the sale of his first venture, he is now based in New York helping marketers to thrive in today’s dynamic healthcare marketing landscape.

Sean Muldoon and Jack McGarry, co-founders of The Dead Rabbit Grocery and Grog, have also found success in the Big Apple, recently winning the World’s Best Bar at the Tales of the Cocktail Spirited Awards. The Dead Rabbit is the culmination of Muldoon’s lifelong dream to combine a sophisticated cocktail service with the best of the Irish-British tavern tradition and it has been very well-received by their American customers. 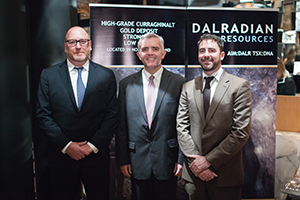 At NI Connections, we believe that when we listen to one another, collaborate and work together, the opportunities to raise the tide for everyone in Northern Ireland are vast.

As of last month NI Connections, through its network, enabled the award-winning Shortcross Gin to secure a listing at The Loop in Dublin Airport where 23 million passengers per year will be able to purchase and savour a taste of Northern Ireland.

We think that this is a great example of what NI Connections is all about, making connections that mutually benefit our members, helping them to widen their networks, make new contacts to collaborate with and ultimately to grow their businesses.

Since 2013, our organisation has been engaging with the NI diaspora, connecting thousands of Northern Irish people living across the globe with each other for mutual benefit – business, tourism, education, even friendship.

The power of the diaspora is something that many countries have recognised, with more than 450 diaspora initiatives now happening around the globe.

You might think that Northern Ireland would be a small player in that mix, but in fact there are 10 million first and second generation diaspora living away from our region – a number that increases to 20 million if we look to those with third generation connections. Most are in the US, Canada, Britain and Australia, but they are also scattered far beyond those countries. You will find the Northern Irish diaspora in over 50 countries around the world including Hong Kong, Tanzania, the United Arab Emirates, Russia and Sri Lanka.

We recognise the long term benefits that these connections could have for our economy, businesses and organisations closer to home and we are delivering tangible results in each of our four core areas of activity: Education, Investment, Innovation and Tourism.

NI Connections is truly a two way street. By engaging our diverse and influential diaspora we can promote business and cultural opportunities for our members, and for Northern Ireland. Continued collaboration, shared vision and a desire to ‘be better’ are at the core of our organisation and we will drive this agenda forward this year.

In turn, we genuinely want to find out how our network in Northern Ireland can help our diaspora to thrive in their chosen fields. We take the time to listen, to connect and to collaborate with our global contact base.

This more progressive perception of NI is something that NI Connections strives for.

We have plans to hold eight NI Connections events in key areas for our diaspora including Canada and China. We have already garnered the support of high profile local names and ambassadors to help us bring the best of our talent to these events, which are open to all of our diaspora.

Our network is open to anybody with an affinity to Northern Ireland through birth, education, business or just being connected in some way through sport or culture.

Great foundations have been laid over the last 12 months and we’ve also started to see the sort of tangible outputs we expect more of in future.

By 2020, our goal is for NI Connections to be the established diaspora network for 150,000 friends of Northern Ireland globally, helping them to connect with each other, exchange advice, pursue new opportunities and thrive.

We have a huge network of influential diaspora who are keen to identify business and cultural opportunities like this for our members, and for Northern Ireland. So please ask your friends, colleagues, business partners and family members to connect with Northern Irish connections.

If you wish to learn more about Northern Irish Connections and connect with the diaspora network, you can visit our website at www.niconnections.com or phone 028 9069 8304.