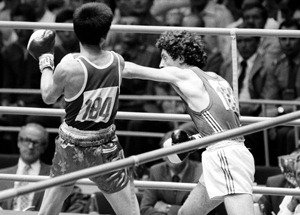 Peter Cheney meets Olympic medallist Hugh Russell to hear his recollections of Moscow 1980 and hopes for local athletes this summer.

Nearly thirty-two years on from coming home with a flyweight Olympic bronze in boxing, Hugh Russell’s enthusiasm for “the biggest show on Earth” has not faded and he’s eagerly anticipating London 2012.  The Belfast man has since had a long career as an Irish News photographer and is currently the paper’s deputy picture editor.

“Back in 1980, if any country in the world thought they had a boxer good enough, they sent them to the Olympics,” he recalls.  With the size of that pool, a boxer had to win more fights to reach the podium.

His own track record included winning bronze for Northern Ireland at the 1978 Commonwealth Games.

Olympic boxers now go up through the world championships and European qualifiers, which gives them “a certain amount of credibility right away” when they reach the Olympics and “they know who’s out there.”

His mind was focused on the boxing, a “rollercoaster” of fights with the pressure building all the way.

The last remaining boxer, of the seven who started for Ireland, he was sure of a medal when he beat North Korean Jo Ryon-Sik (3-2) in a quarter-final.  “Obviously, we were all overjoyed because medals aren’t that frequent,” he remarks.

Jim McCourt had been the last Irish boxing medallist before him, taking a lightweight bronze at the 1964 Tokyo games.  Coach Gerry Storey had kept reminding Russell that “we’re not finished” after each game, and there were no great celebrations that night.

They finally had “a let-down of the hair” on the night he went out in the semis to Bulgarian Peter Lesov (0-5), which guaranteed his bronze.

He followed Jo Ryon-Sik’s career but never met him again.  However, he did meet Peter Lesov in Belfast in 2001, when he was the country’s national coach at the Boxing World Championships.

The Olympics, Russell contends, are worth the hype.  “I know you hear a lot of glossy stuff about it but it definitely is the biggest show on Earth and, as I say to any of the kids that go to the Olympics, it changes your life.”

Walking about the Olympic village with the world’s élite sportsmen is unforgettable.

He still receives letters, addressed to ‘Hugh Russell, Olympic medallist, Moscow’, from autograph hunters from Germany, Sweden and further afield.  “I can imagine somewhere, maybe in Germany somebody sitting, saying: ‘I’ve two Hugh Russells.  Have you got a David Beckham?’  It’s like cards that they swap.”

As for London, Russell would like to head over but has not yet made any plans.  2008 light-flyweight medallist Paddy Barnes (who took a Commonwealth gold in 2010) is also from North Belfast’s Holy Trinity club and qualified for the Olympics in April.  “I mean the whole Irish team becomes an interest but you do have personal interests.  We’re very fortunate to have two Olympic medallists from the one club, which is a major achievement.”

It’s time for local athletes to do their best to prepare for a once-in-a-lifetime experience. “It’ll change their lives,” he adds, “and they should give it everything that they possibly can in the run-up to it, to give themselves the best possible chance.”

Golf will be re-introduced to the Olympics in Rio de Janeiro in 2016; it was briefly played back in 1900 and 1904.  The fact that multi-millionaire golfers are setting their sights on an Olympic medal shows that it “just holds that high an esteem.”

The small steps that led up the games are some of his favourite memories.

“It’s a great morning when you get that letter from the Taoiseach through the post, telling you that you’ve been picked to represent Ireland,” he recalls.  Being sent to get measured up for blazers and tracksuits also stands out.  “It’s all the wee, behind the scenes stuff that people don’t see that starts the excitement, starts [you thinking that] this is really going to happen.”

His bronze was the first Olympic medal he had ever touched.  Once an athlete is off camera, the medal is taken away to engrave the name of the holder.

“I always remember going back down the next day to get my medal and this girl, obviously Russian, behind a counter, and a wee chit that you gave her, and she flicked through all these medals, and she gave you your medal, and you took it out and there was your medal.  Your name was on it.”

A pile of other medals, the duds with misspelt names, sat at one side and he often wonders what happened to them.

Russell’s passion for the games is clear.  He’s also keen that his countrymen share in the excitement and, if possible, share the moment of success with Irish athletes across the water.

“I do think if anybody is fortunate enough to have the chance to go and be there when somebody wins something, if you get a chance and you possibly could do it, grab it with both hands ‘cos it’ll never be as close to us again.”