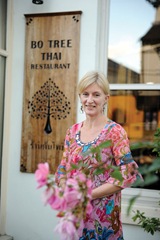 Helen O’Malley manages an authentic Thai restaurant in Belfast but also runs a busy household with seven children. Emma Blee finds out how she has made it a success through tough economic times.

The Bo Tree Thai is one of Belfast’s most authentic Thai restaurants but what many don’t realise is the history behind the eatery.

Restaurateur Helen O’Malley studied history at Oxford University and has worked as a waitress since she was young. While her degree didn’t exactly lend itself to the catering industry, it was always something she loved.

Her passion for food and travelling eventually led her to Thailand where she met her first husband Soutark. A few years later they moved to England and opened a restaurant in Oxford together, Chiang Mai. Soutark’s authentic Thai cooking combined with O’Malley’s front-of-house experience guaranteed that the restaurant was an instant success.

Despite getting divorced in 1997, the pair continued their working relationship. A year later O’Malley met her current husband David Gavaghan.

When they moved to Belfast in 2006, O’Malley decided to sell the premises in Oxford and open a new restaurant in Belfast.

“We thought there was a big gap in the market in Belfast for what we had in Oxford,” she says. “There were a couple of restaurants here but we felt nothing was as good as we could do ourselves.”

She adds: “I suggested to my ex-husband that maybe we would like to relocate from Oxford to Belfast, so we sold up in Oxford and he and his wife now run the Bo Tree with me.”

While the Bo Tree might seem like a complicated workplace to some, O’Malley says it works well: “Working with your husband or ex-husband means you need to have very separate spheres of control. His has always been in the kitchen and mine has always been front-of-house.”

She manages the day-to-day running of the business from home during the week, meaning she can also look after her children. At weekends and special events she carries out front-of-house duties at the restaurant.

For O’Malley, the restaurant already has great memories. In November 2006, she and her new husband got married in the restaurant, marking its first event.

But she explains it wasn’t all smooth running: “The night before the wedding there were about 50 builders in the restaurant, I was here to 2am unpacking tables and unwrapping plates. In retrospect, I thought: ‘What on earth was I thinking?’ But in a way, if we hadn’t had the target of the wedding it probably would have taken six months to get the restaurant finished.”

The restaurant opened to the public a week later and she says they haven’t looked back since.

However, opening a new restaurant at the beginning of a recession has been tough: “Running a restaurant is not a sure-fire way to make money. It has to be something you are very passionate about and love doing, because it’s very hard work,” remarks O’Malley.

The restaurateur sees big differences in the way that people socialise here in comparison to England: “I would say Northern Ireland feels about 15 years behind England in terms of the amount that people go out to restaurants.” 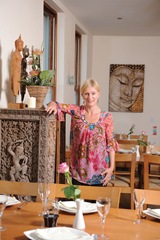 She comments: “I think historically because of the Troubles, people didn’t want to drive into Belfast to go out. So people who spent their lives not going out in Belfast, it takes them longer to get into the idea of it.”

However, she has noticed a boost on Friday and Saturday nights and is optimistic about the future: “We now have a lot of regulars who come almost every week. We have a couple that come every Friday night and order the same food. It’s lovely, they love coming here.”

She says her main reason for opening the restaurant was to “bring joy to people through food”.

“People come here, they have a delicious meal and they are very happy. It’s wonderful to create an environment where people can forget about their problems for an evening. It makes it all worthwhile,” she says.

O’Malley believes the name she chose for the restaurant has had great relevance to the circumstances they have faced in business.

On a day out in the park with her family, she came across a book on trees and plants and stopped at a page about the Bo Tree. The book explained it was a holy tree, under which Buddha sat to find enlightenment. He sat through trials and tribulations but in the end he achieved nirvana happiness.

“I thought: ‘Perfect for Belfast, years of troubles and years of problems, but in the end happiness,’” remarks O’Malley.

She quips: “It’s been very funny having opened it and called it the Bo Tree and struggling through the recession. I was saying to the staff we should have called it the bamboo shoot because it’s well-known for shooting up very quickly.”