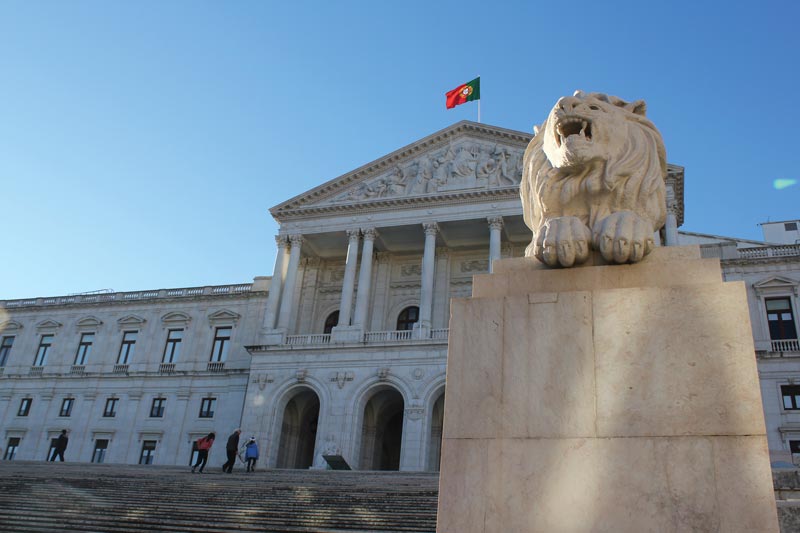 Visiting Portugal as part of a wider analysis of the impacts of the European financial crisis, agendaNi speaks with João Galamba, a Socialist Party MP in Portugal’s Assembly of the Republic, about the country’s unprecedented economic turnaround.

In 2015 outgoing Prime Minister Pedro Passos Coelho remarked “I hope not to be summoned back to a house in flames” as he handed over the reins of power to an unlikely coalition of the Socialist Party, the Left Bloc and the Communist Party. Having maneuvered the country through an unpopular Troika-led programme of austerity, Coelho was one of many national and international critics who feared the methods of the incoming coalition would only deepen the financial crisis in Portugal.

However, the so-called ‘reckless’ adventure by the anti-austerity alliance has so far confounded those critics with record economic growth and falling debt to GDP levels. Whilst scepticism remains around the sustainability of the model being exercised by the Government, this scepticism is not reflected in public opinion polls which continue to show increased levels of support for the Socialist Party, even higher than the result which saw them emerge as the main player in a coalition government.

On the current government’s watch, unemployment has fallen in the country from around 12.6 per cent to 10 per cent and it is estimated that an additional 90,000 jobs have been created. The suggestions of unsustainability are not unnerving foreign direct investment, with the likes of Volkswagen, Continental and Bosch, either increasing or planning to increase, investment in the country.

When agendaNi travelled to Lisbon in May to meet Galamba, his party was riding a wave of civic pride. As well as recording quarter on quarter growth for the first year and a half of their tenure, the Government was also benefiting from a national high. The country’s national soccer team had brought home the Euro 2016 title the previous summer and in the days before our trip, singer Salvador Sobral had been crowned winner of the Eurovision song contest. Added to this was the recent visit of Pope Francis to Fatima.

Asked how the unorthodox coalition, which was unthinkable in the last 40 years of party politics in Portugal, can continue to work despite clear division on a range of policies, Galamba explains: “Our focus is on the things we agree on. We are fully aware that there are issues that we are at odds on but this government is about the things we can do together.”

Galamba outlines that the relationship is one of co-operation rather than direct support. The Communist Party and the Left Bloc have agreed not to interfere on the Socialist Party position on Portugal’s international commitments, such as the European Union and in NATO. Other areas of necessary co-operation are around agreement on an annual budget and on motions of disagreement. The relationship stands that while the far left partners will never agree a support of confidence in the Socialist Party-led Government, they will stand against attempts to collapse it.

Galamba states: “I believe that there was a clear understanding that the left’s electorate would never understand that after the violent, right-wing, liberal programme of the previous government, we opted not to offer an alternative based on our differences.

“The right was so radical and extreme in their austerity that the communists and the Left Bloc understood that business as usual could not continue.”

The continuing swell of popularity for the Socialist Party has led some to believe that by calling a snap election, the party could now form a government on their own and distance itself from its coalition partners. However, Galamba stresses that such a move is not even up for consideration.

“Our popularity is based on our current method of governing. There is a broad-understanding that this initiative is not a Socialist Party standalone initiative. The people value this government and no one would benefit from opportunistic strengthening.”

Galamba maintains that the two right wing parties that governed between 2011 and 2015, not only implemented deep austerity but opportunistically took advantage of the Troika programme to further their extreme liberal agenda.

“They used the foreign intervention to implement something that the people would never vote for and they did it under the cover of the Troika.” 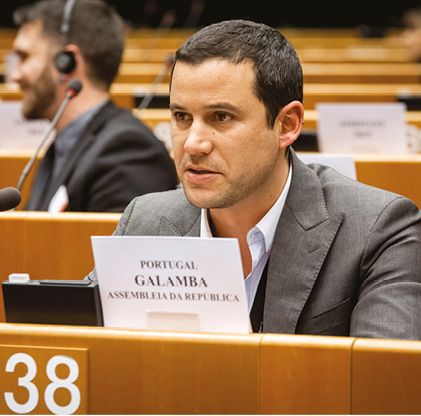 “I believe that the EU are now obliged to support what we are now doing in government rather than look on it with scepticism.”

He also believes that the punishment of “misbehaving” countries through austerity was a misplaced concept and failed to recognise an overarching problem relevant to the whole European Union. “We have always understood that the financial crisis was not caused by bad behaviour of one or two or three countries. It was a deficiency in the monetary architecture of the European Union that created a context where the financial crisis was possible,” he says.

“Of course there were things that could have been corrected in places like Ireland, Portugal and Greece but the main problems were created by this deficiency and aggravated further by this same deficiency. Excess austerity did not have the means to make countries sustainable. In Portugal, it collapsed the economy, it collapsed potential GDP and it aggravated our debt to GDP ratio.

“Portugal cannot be blamed on irresponsible public finances. When we entered the excessive deficit procedure in 2006, we exited it a year earlier than planned with excessive praise. Our debt was decreasing for the first time in many years when the financial crisis hit.

“As a small open economy, which is part of a monetary union, you cannot by yourself isolate your own economy from the international capital flows that were going on. I believe it was convenient for some people to represent the problem as being a behavioural crisis rather than a systematic one.”

The economist agrees that budget consolidation is important but argues that it should not be done in a way that will sacrifice economic growth for a reduction of the deficit. 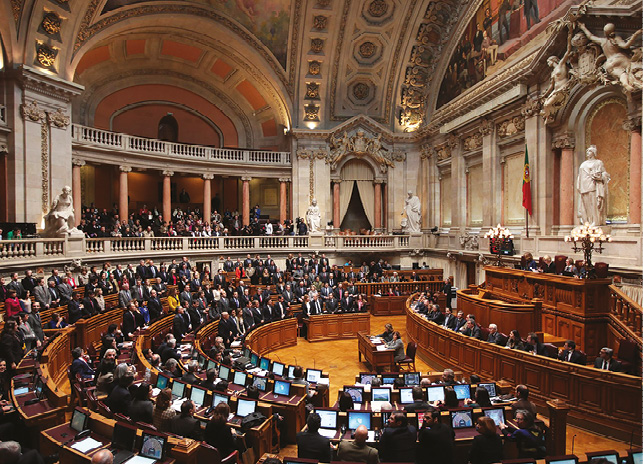 Speaking to other stakeholders in Lisbon, it is noticeable that euro-scepticism has not risen to the same levels as it did in the likes of Spain, Greece and even Ireland. Galamba qualifies this by stating that Portugal did not experience the same levels of growth in terms of public expenditure or salary inflation which occurred in Ireland or Greece post-crisis. He states that the quality of life in Portugal did not increase to the same degree and believes that austerity was easier sold to these countries which had recognised the rise.

However, even though public opinion of the European Union did fall during the most acute times of austerity, Portugal did not witness the same levels of public demonstration, and no violence, as were seen in other countries. Galamba points to almost 50 years of dictatorship rule up until as late as 1974, as a reason the Portuguese appear more passive.

However, street protests did occur, now known as the 12 March Movement, where almost one million people took to the streets to protest austerity. Although, unlike in Spain, where the Indignados Movement brought about the birth of the now popular Podemos political party, and in Ireland, where People Before Profit found space to grow, no new political party was created in Portugal.

Galamba explains: “I believe our political system accommodated those dissenting voices. In other countries, we witnessed these new political movements formed outside of the system and act largely against the system, in Portugal we had established parties that represented the anger.

“What we had was anger at the politics but not necessarily the political system. While the crisis represented an existential crisis to Portugal, the party system was inclusive of most voices. After the election, the inclusion of those parties that would have been deemed outside of the system, originally, added further resilience. The risk came in incorporating people who were angry with the system into the same system, however, I believe the results of this government have given further confidence to Portuguese people in their political system.”

The EU and the IMF believe the current government is achieving fiscal targets by reducing public spending and freezing public consumption in areas such as health. Critics believe that this method masks a huge public debt problem in Portugal, with some further suggestion that Portugal is highly vulnerable to any further financial turbulence in Europe.

Galamba believes that the European Union’s approach to the crisis was wrong, The Socialist Party reflect a general positive public opinion towards the European project, which was crucial to the establishment of democracy in the country.

However, despite a high tolerance in Portugal, he warns that this tolerance is not unlimited. “These limits were close to being pushed in 2012/13 when public opinion of the EU was at its lowest, however, it has now begun to rise again.

“EU leaders can expect Portuguese support but this support is not totally unconditional and this current government has played a key role in returning that support. I believe that the EU are now obliged to support what we are now doing in government rather than look on it with scepticism. The EU can benefit from showing that it can facilitate solutions to the financial crisis from both the left and the right.

Galamba states that the party’s pro-growth strategy is compatible with the eurozone’s fiscal rules: “We can be European and not necessarily agree with the current status quo. It doesn’t need to be a for and against scenario. What we are seeking is the ability to present alternatives to achieve the goals we share with the EU.

“We believe our results are speaking for themselves but our success must be captured as a European project rather than that of a ‘rogue government’. We aim to influence the EU to be enablers, and to be compatible with both left and right options.”