Members were updated on the First and deputy First ministers’ Chinese visit and the potential disruption from Parliament Buildings’ roof renovations. Smaller parties are also warning of a ‘mission creep’ in OFMDFM’s growing remit.

Stormont’s minor parties often claim that they are sidelined but the passing of Jim Allister’s Civil Service (Special Advisers) Bill on 3 June demonstrated how much an individual MLA can influence politics.

In terms of numbers, the Bill was certain to pass its final stage after the SDLP agreed to abstain. Sinn Féin voted against and was joined by Green MLA Steven Agnew who said that the legislation undermined the principle of rehabilitation. Agnew was, though, not prepared to sign the petition of concern as he felt that he and the SDLP were being “pushed” to ensure that Sinn Féin got its way in the debate.

Before the debate, there was some speculation that Daithí McKay would attempt to better Tommy Henderson – the longest filibuster speaker in the history of Stormont. Henderson, a left-wing independent unionist, had spoken for 10 hours against the Appropriation Bill on 26-27 May 1936.

McKay’s speech lasted just under two hours and the tactic proved ineffective as the Speaker, under standing orders, can call a vote once he has concluded that all sides in a debate have had their say.

On 10 June, Peter Robinson updated the House on his visit to China with Martin McGuinness and explained that the Executive was considering the opening of a Northern Ireland bureau in Beijing. McGuinness and Robinson had again met with Madam Liu Yandong (now effectively a Deputy Prime Minister) and also the Chinese commerce and education ministers.

“Given the scale of the Chinese economy,” Robinson said, “there is trade potential for a small country such as Northern Ireland if it can get only a small part of the trillions that are spent by the Chinese people.”

Members called for action after the revelation that the Housing Executive had overpaid contractors by £18 million. Mickey Brady said that this was “either incompetence on a scale never seen before or something more serious with potential legal implications.” A Housing Executive investigation is continuing alongside an independent review. 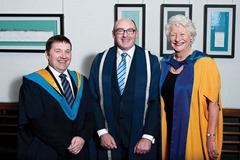 Later in the month, Alex Attwood and Environment Committee Chair Anna Lo were united in opposing Bill amendments that would transfer planning powers to OFMDFM. The UUP, SDLP and Alliance Party believe that the DUP and Sinn Féin are seeking to encroach on other ministers’ work whereas the two main parties claim that this will improve efficiency.

Details of the refurbishment of Parliament Buildings’ roof, due to start in the autumn, were meanwhile outlined by the Assembly Commission on 18 June. Pat Ramsey confirmed that “no noise and disruption to plenary sittings will be tolerated” during the 12-month construction period.

Some committee meetings, though, may be disrupted. Alternative options included holding meetings in the Assembly chamber and even moving all committees out of Parliament Buildings although this would increase costs. A final decision was expected before the recess with Ramsey anticipating that “we will go for the option that means least disruption to committees and brings value for money.”