Tensions between the DUP and Sinn Féin emerged in a vote for a new Principal Deputy Speaker. MLAs considered the impact of the spring snow and also looked forward to President Obama’s visit.

April’s proceedings began with a call by Sinn Féin’s Phil Flanagan for a ‘one-stop shop’ to advise consumers and small businesses about their energy needs. The motion was resolved without a vote.

Martin McGuinness updated MLAs on the First and deputy Ministers’ fifth meeting with President Obama. The President’s interest “has not flagged” and he was “very hopeful” that Obama would promote inward investment when he visited in June.

Following a request from Peter Robinson, members responded to the death of Baroness Thatcher which had taken place that morning. Most speeches mixed sympathy with recollections of the parties’ frequent disagreements with the former Prime Minister.

Sinn Féin’s response was the exception. Raymond McCartney repeated Gerry Adams’ condemnation of Thatcher and was interrupted four times by unionist MLAs. The sole female speaker, Arlene Foster added: “I found her to be a tremendous advocate, a tremendous thinker and an unashamed free marketer, something that I greatly admired in her.”

On the following day, Regional Development Minister Danny Kennedy and Agriculture Minister Michelle O’Neill updated the House on their responses to the severe weather. Alliance MLA Trevor Lunn “vividly” remembered the heavy snow in 1963 and believed that this year’s snow was much worse in comparison. 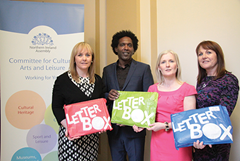 An SDLP motion on restoring the Civic Forum was approved by 48 votes to 47. The forum, set up under the Good Friday Agreement, last met in 2002. The party’s proposal was also supported by Sinn Féin, the Alliance Party, Steven Agnew, Basil McCrea and John McCallister.

Sinn Féin MLA Francie Molloy had held the post of Principal Deputy Speaker since 2011 but stepped down after his election as MP for Mid Ulster. The first step in filling the vacancy involved the election of a Deputy Speaker on 15 April.

McLaughlin said he was “somewhat disappointed” in Robinson’s remarks. “I have had the opportunity, given my long involvement in this Assembly, to work with people across the political spectrum,” he protested. “I think that I have demonstrated to any fair-minded person that I can discharge my duties, and I do it fearlessly.”

McLaughlin received 80 votes from his own party, the SDLP, Alliance and the DUP. The Ulster Unionists, Jim Allister, Steven Agnew and two independent unionists voted against. The SDLP voted against him in the next vote, for Principal Deputy Speaker. The result was 70-28 in favour.

Members were meanwhile united in their tributes to the people of Boston after the bomb attack in the city. “All of us who have been to Boston will know that the city is at once American, European and Irish,” Alex Attwood stated. “Consequently, the images on our screens last night which showed what happened in Boston yesterday, seem all the more chilling and telling.”

The House’s sittings will continue until the summer recess, which commences on 6 July.