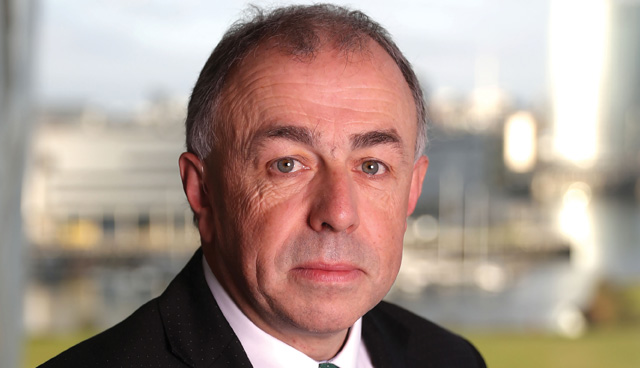 Head of Energy Strategy Division in the Department for the Economy, Joe Reynolds, discusses the challenges facing the development of a future energy strategy for Northern Ireland and the trends affecting its perceived outcomes.

Contextualising energy policy in Northern Ireland as being currently caught between the 2010 Strategic Energy Framework and the development of a fresh strategy to replace it, Reynolds points to a number of key challenges facing government officials.

The first is the absence of an Executive, with no ministers providing policy direction or assessing proposals for almost two years. The second is Brexit, which provides a challenge in that uncertainty curtails any long-term vision for a strategy. A further challenge lies in light of the recent court ruling around the ability of officials to progress development or delivery of new policy.

Reynolds says: “We’re constrained by what has been ruled and the only fresh advice we have is the Secretary of State’s announcement that she intends to introduce legislation which will include provisions to give greater clarity and certainty to enable Northern Ireland’s departments to continue to take decisions in the public interest and to ensure the continued delivery of public services.”

While controversy has surrounded Northern Ireland’s heat ambitions through the fallout of the heavily flawed RHI scheme, ambitions towards electricity have been largely successful. Currently, Northern Ireland has a production from renewables percentage of over 35 per cent, with the Department confident that the 40 per cent target will be met before the 2020 deadline.

This progress has been a result of diversification in the market. As Reynolds explains, SEF has resulted in a transition from the point when the vast majority of energy in Northern Ireland was being generated by the three big power stations, to now where there are over 23,000 energy producers in the Northern Ireland market. Even accounting for the fact that over 22,000 of those producers are small (<50kW), it still means that there are over 1,000 producers who are part of the market which did not exist previously.

“The changing shape of the market presents a challenge in terms of ensuring a future strategy can encourage this,” he adds.

Ensuring that any future policy accommodates renewable energy production is crucial to the UK’s commitment to the Paris Agreement on climate change and on delivering on the future targets for 2030 set out in the EU’s Clean Energy Package, something the UK is committed to so long as it remains an EU member state.

Properly assessing need and the changing needs of Northern Ireland consumers will be central to any policy aiming to achieve those targets. Demographic projections show that, over the period of time any new strategy is set to cover, Northern Ireland’s population will increase by 6.4 per cent. “This means that we are not only dealing with a different size of a target audience but also a different shape in terms of an older population and a different family size dynamic than what we have previously dealt with,” he adds.

“A good example of this is around domestic heat. The environment in which people will be living will change quite significantly over the next 15-20 years, when you assess the number of one and two-person units, rather than the larger family size that we have had to provide for in the past.”

The Department’s ambitions revolve around decarbonisation, digitalisation and decentralisation.

On decentralisation, Reynolds suggests facilitating further the current changes taking place in relation to increasing the number of producers within the system. On decarbonisation, the need to consider how a strategy would factor in the transport sector, a major source of emissions in Northern Ireland. “Currently around 29 per cent of greenhouse gases in Northern Ireland come from the agricultural sector and 21 per cent comes from the transport sector, so we need a strategy to take account of the source of the problems which we are trying to tackle.”

The Department’s ambition is for the creation of an energy eco-system in Northern Ireland. This will require multi-stakeholder partnership, central to which is the citizen. “We need to think more clearly about how we define the problems in terms that are meaningful for the citizen. Not least because, the answers being provided in public policy terms are often offered in terms of wellbeing for citizens, something which was at the heart of the Programme for Government agreed by the last Executive and which enjoyed a high level of political consensus.”

The former Director of the Programme for Government in the Executive Office adds: “Having agreed this roadmap, we ought to return to it as a methodology for a new energy strategy, not just on how we take it forward but also on how we set ourselves the challenge of evaluating its success.”

Emphasising some of the key outcomes that he believes should be included in a future energy strategy, Reynolds points to ambitions for an increase in renewable energy production and a focus on domestic heat and transport, especially around decarbonisation.

He adds: “As well as increasing the renewable energy that is available to us, there also needs to be a greater focus on how and when we use it. We face a challenge in terms on energy storage, particularly for commercial and industrial use. We need to examine how the energy that we are currently generating, which isn’t being used, can be retained and deployed in different ways.”

Technology and innovation have a major role to play in not only offering greater price stability for consumers but also in utilising a data-rich environment for sharing and collaboration in tackling issues.

Finally, a future strategy needs to point to increasing the economic potential of Northern Ireland’s energy sector. That focus should include exporting successes, such as world-leading technology, enabling the sector to build capacity to create an economic benefit and increase employment across the sector.