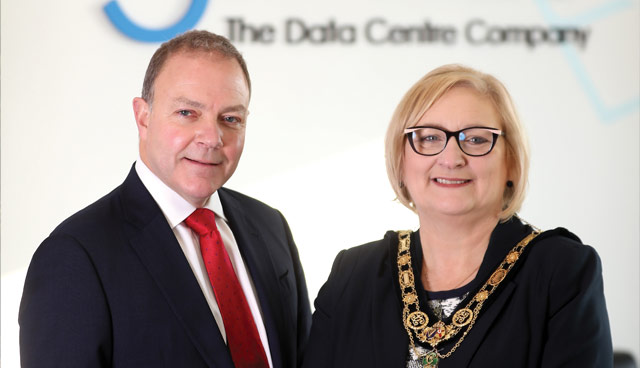 5NINES NI General Manager Paul Besley outlines that three key factors were influential in the decision by the global data centre firm to locate as the first tenant of the Atlantic Link Enterprise Campus in Coleraine. The primary factor was connectivity and the site’s positioning just yards from the landing point of Project Kelvin, the low latency, high-capacity transatlantic fibre cables linking the Causeway Coast directly to North America and major European cities.

The arrival of Project Kelvin was a key enabler of a 40-acre enterprise zone designation within the Borough, which offers enhanced capital allowances for investors, a second key factor for 5NINES. Thirdly, Besley indicates that the company recognised a growing demand for Northern Ireland-based data storage, especially within a borough that aspires to support and grow burgeoning data-heavy sectors such as fintech, pharmaceuticals, cyber security and film production.

Speaking about the level of demand that exists here, Besley says: “Northern Ireland’s reputation as a data-centric region is growing and, as such, so is demand for storage. We noticed a trend whereby many companies were either storing their data in-house or utilising data centres in Dublin or London. Now, with the offering of a quality, purpose-built facility in the province, companies and businesses have voiced their desire to make their data and their equipment more accessible and closer to home.” 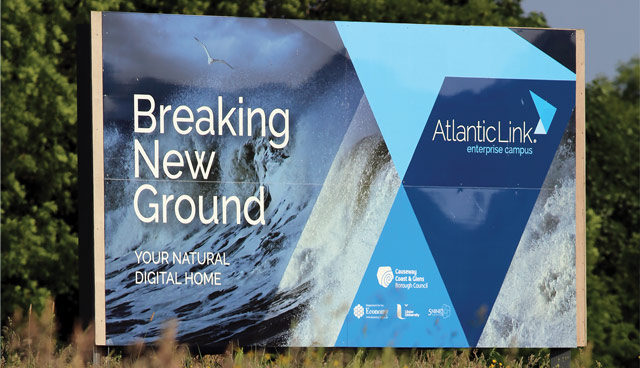 “Coleraine, the Borough and indeed the Causeway Coast has, for a long time, invested time and energy into our place-making potential. We have ensured that we are not just attractive to business but also to people, making the Borough a great place to live and work.”

As the owner and operator of data centres across the world, including in countries such as the UK, the USA, the Netherlands and Finland; Mayor of Causeway Coast and Glens Borough Council Brenda Chivers explains that 5NINES’ vast experience and high-levels of ambition complement the Council’s own aspirations for the area.

“The opening of the 5NINES data centre is a significant milestone in the development of the Atlantic Link Enterprise Zone and will help to recognise our vision to create a digital and creative economy for home-grown business and international investment. The enterprise zone allows us to further our aims to build on the fantastic pipeline of talent being produced from the nearby Coleraine campus of Ulster University. We recognise that 5NINES is not just a tenant within this area but is also a facilitator of job and economic growth through the services it is offering.”

The 45,000 sq ft data centre is built on 5NINES’ five-acre site within the 40-acre Atlantic Link Enterprise Campus, allowing significant further expansion when required, and the Council recently appointed international professional property agents CBRE to market the remainder of the Atlantic Link Enterprise Campus site. CBRE is set to launch a development brief for phase one of the development in January 2019.

The Mayor explains that aside from good connectivity and government incentives, such as Enhanced Capital Allowances, the fact that the Enterprise Campus is council-led should act as a further incentive to potential investors.

“This Council has displayed a strong reputation for being proactive in seizing economic development opportunities. With Council acting as landlord for the site, interested parties are assured that development will be progressed effectively, efficiently and speedily. We have an onus to generate occupancy. Also, Council will be on hand to offer the necessary support and to utilise our good working relationships across industry for the benefit of the client.”

Besley underscores this point by crediting the “enablement” of the site prior to the data centre opening: “While the Enterprise Campus and the Enhanced Capital Allowances that it brings were big draws for us, another important factor was the assistance offered in bringing key infrastructure to the site such as power, water and drainage and connectivity. Assistance in introducing ‘last-mile’ connectivity by the Council has been of significant benefit to us in getting the centre operational as efficiently as possible.”

Both the Council and 5NINES have been collaborating on marketing their offering across the UK and Ireland over the past year, including being hosted by the British Embassy in Dublin and by the City of London Corporation at recent events.

Both partners agree that there is untapped potential within the UK and Irish markets. “There is a huge established market in Dublin, a lot of which is servicing EU clients, including those in the UK. It’s recognised that post-Brexit, it may arise that companies will have to split their data between Dublin (EU) and London (UK). What we’re putting forward is the potential to keep all data and equipment on the same island, where it is accessible for support teams,” says Besley.

“We believe that we have a great connectivity offering to support that established Dublin market and to bring some of that here. As demand for ‘edge-locations’ grows globally, our offering in Northern Ireland is ideal.” 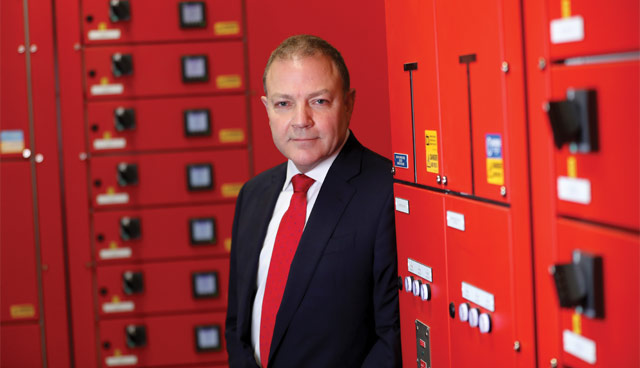 “We believe that we have a great connectivity offering to support that established Dublin market and to bring some of that here. As demand for ‘edge-locations’ grows globally, our offering in Northern Ireland is ideal.”

Besley explains that both the Council and 5NINES have recognised a common trend of interest from emerging growth sectors: “Recently there has been noticeable activity in those emerging sectors such as pharma, computing and programming, gaming, film and television production, financial services and, particularly, a surge in fintech. Traditionally, if companies involved in those sectors wanted a base in Northern Ireland, they sent compliance teams or software development teams here with most front-office staff staying in the likes of London or Dublin. Now, when we talk to them and they realise the data centre capability, there is a greater awareness that expansion and growth capability exists in Northern Ireland.

“Likewise, as Northern Ireland becomes a greater prospect for film and media companies, the data hungry elements of those businesses with low-latency requirements like computer graphics and animation, are now able to be met, meaning that there is greater recognition of hosting more assets in Northern Ireland and working more locally.”

In hoping to attract more of these companies, either into or back to Northern Ireland, Besley points to a number of unique assets offered by the only carrier neutral colocation data centre in the region. Built to a Tier III+ level of resilience, the centre has built in redundancy in all core power and cooling components, ensuring that failure or maintenance will never affect service to the customer.

He explains that six data halls within the centre are to be opened on a phased basis, with offerings to customers of storage provision, ranging from one quarter rack to private caged areas and suites. Outside of the technical space, there is also an offering of dedicated office and hot-desks, as well as de-box, build rooms and secure storage.

“A large portion of the £20 million investment made by 5NINES on the site is what we describe as hidden infrastructure. Infrastructure that is vital to high-level security offering we provide including duplication and replication of key systems, power capability, cooling, fire detection and suppression and security,” he adds.

The Mayor is quick to point out that while the Borough prides itself on its economic attractiveness, there are also wider societal attractions for indigenous and foreign businesses. “Coleraine, the Borough and indeed the Causeway Coast has, for a long time, invested time and energy into our place-making potential. We have ensured that we are not just attractive to business but also to people, making the Borough a great place to live and work. As well as our beautiful location on the Causeway Coast and the variety of tourism offerings in the area, we have also established a reputation as a hub for event tourism.

“This area is recognised for its world class events in the shape of the North West 200, Airwaves Portrush International Airshow and the hosting of two recent Irish Open golf tournaments. In utilising our reputation to attract the upcoming 148th British Open in 2019, the Borough will again be able to showcase its attractiveness, its educated and committed workforce, a pragmatic business culture and its outstanding infrastructure and connectivity,” she explains.

Adding: “With nine blue flag beaches, four areas of outstanding natural beauty, and the UNESCO World Heritage site of the Giant’s Causeway, the area has an unrivalled quality of life. Few places offer a better location to start a business and enjoy unparalleled space to work and live.”

Looking forward, Besley says that the short-term aim of 5NINES is to attract full occupancy of its co-location and server hosting offering, with each of the six data halls capable of housing up to 200 full racks. He notes that 5NINES also has the potential to replicate the data centre within their land, if necessary. “We have expansion capability if it is required. That might be that demand exceeds our current 1,200 rack capacity or we are open to conversations around creating a bespoke data centre for an interested party.”

The Mayor mirrors this ambition, stating that the Council is seeking to fill vacancies within phase one of the Enterprise Campus at the earliest possible stage, after the development brief is launched in January 2019. She elaborates, explaining that the Council is also open to innovative suggestions, such as that from potential developers, indigenous SMEs or foreign investors.

“Our ideal situation would be to fill phase one quickly and facilitate the development of phase two. We would want the success of this model to turn a focus on to Causeway Coast and Glens as a place to come and a place to do business.”