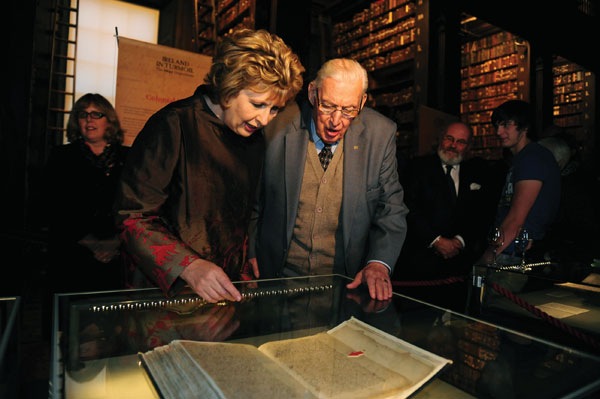 An exhibition detailing declarations of violence allegedly caused by 17th century Catholics against their Protestant counterparts has been opened by President Mary McAleese and attended by Lord Bannside.

“Understanding the perspectives that have estranged us” is vitally important if we are to become “good neighbours, friends and partners across sectarian divides,” according to Irish President, Mary McAleese.

During the opening of the new exhibition at Trinity College Dublin, showing transcripts from the 1641 Catholic rebellion – generally regarded as one of the bloodiest in the island’s history and the catalyst for the creation of a Protestant identity in Ulster – McAleese and Dr Ian Paisley symbolically read through the manuscripts together.

Called ‘Ireland in Turmoil: the 1641 depositions’, the exhibition in the university’s Long Room contains approximately 8,000 depositions naming around 90,000 people. The harrowing tales of the alleged crimes are also available online at www.1641.tcd.ie

Researchers, librarians and academics from Trinity and Aberdeen and Cambridge Universities scrutinised and organised the manuscripts over three years in the €1 million project.

McAleese recounted how the “facts and truth have been casualties along the way and the skewed perceptions have contributed to a situation where both sides were confounding mysteries to one another.”

Watched by his wife and children, Lord Bannside said: “Our fellow countrymen and women in the 1600s knew troubles as we have, thank God, never known it. The testimonials before us in this exhibition tell in graphic detail the losses they sustained and the crimes carried out against them. These troubles were not borne by one social class, or another, or by one gender, or another. They were not limited by age or religious belief.”

He continued by commending the manner in which the stories were individualised. “Here lie tragic stories of individuals – here too is a dark story of our land. To learn this story is to know who we are, why we have had to witness our own trouble, and why we live on a divided island … May we really learn what this exhibition can really teach us.”

Paisley ended by asking for God’s blessing on the room and referring to “a man well known to Trinity, Lord Carson, who said ‘God save Ulster’,” at which the audience laughed and clapped.