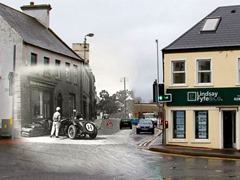 Old and new views are coming together in a new archives project.

The passage of time’s effect on some well-known street scenes across the province is being recorded in a new project by the Public Record Office of Northern Ireland. Archived photos from the early 1900s have been merged with views of the same locations in the present day.

“Paradoxically, the two things that people have noticed are the similarities and the differences,” PRONI’s Sam Cromie explains. Most of the streets and buildings are still in place but life around them is “almost unrecognisable” with the biggest change being in transport: “Boats and trams have been replaced by cars and buses, and the infrastructure of the city has evolved with this,” he says of Belfast. “Cobbled streets have given way to roads. Tram tracks are now bus lanes.”

The idea was generated during PRONI’s Preservation Week as a way of using its extensive photographic collection in a new way. Cromie adds: “People had to recognise the places, and we had to be able to take the photographs, so the locations needed to be accessible but we wanted to bring a splash of colour. That’s why you have buses and even a fire engine in one.”

The full collection is available at www.flickr.com/proni 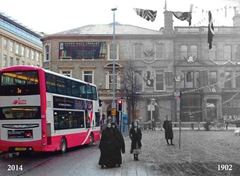