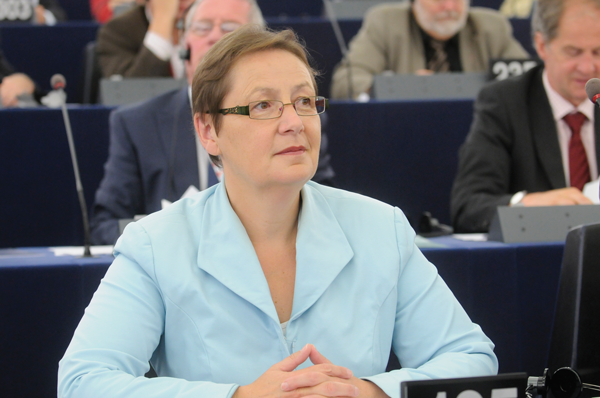 Europe’s economy will be left behind without a green recovery, according to Bairbre de Brún. Extra investment is needed in the environmental sector but her fellow MEPs want more corporation tax.

Climate change is a key interest for de Brún who is this month representing her GUE/NGL group at the UN climate change conference in Durban. GUE/NGL, which stands for the Confederal Group of the European United Left – Nordic Green Left, is the Parliament’s sixth largest group with 34 MEPs.

The aim at Durban is to get progress on a replacement for the Kyoto protocol, although the USA refuses to back Kyoto unless emerging economies agree to cuts. De Brún warns that specific targets and timetables for action are needed “to hold off the possibility of dramatic and catastrophic climate change.”

She demands that industrialised countries move towards a low carbon economy (which in practice pollutes less and emits fewer greenhouse gases) but also wants them to agree on how to finance and manage a ‘green climate fund’ to support developing countries. That fund would allow developing countries to cope with existing climate change and help them “develop their economies without going down the dirty path that we went down,” the MEP explains.

Asked for her level of optimism, de Brún accepts that this year’s conference will be “very challenging” because of the US elections, the economic crisis and the way that is used as an excuse for inaction. Against that argument, she points to the 2006 Stern report, which found that moving towards a more sustainable economy would create jobs.

“My only hope would be that if countries move away from the kind of stand-off that there is at the moment – ‘I won’t do if you won’t do’ – to an approach where they’re coming together to reach a common solution to a common problem,” she comments.

Strong climate targets and timetables must also be set by the European Union and the Assembly. Sinn Féin’s 2009 European manifesto called for a mandatory 20 per cent increase in energy efficiency by 2020. Its Assembly counterpart calls for a long-term renewable energy strategy for the North and “adequate resources” for the Green New Deal.

America and China are already pressing ahead with green stimulus packages (despite rejecting Kyoto) and Europe risks being left behind, especially as China invests in low carbon technologies.

“We have done some good work at home,” she comments, “but instead of continuing at that, we could end up moving too slowly, being afraid of investing in this because of the economic crisis, and then finding, when we decide to go that road, that we’re buying from China rather than exporting to China and the other growing economies in the world.”

It is put to her that the A5 upgrade (championed by Sinn Féin) would have increased carbon emissions. She responds by saying that the Executive needs to draw up an overall climate change strategy (backed up by investment) and then decide what projects will or will not go ahead.

The North West, she adds, has demanded road improvements for road safety but has also sought new rail development, which she would welcome. De Brún then talks of the need for sustainable transport and adds that the Agri-Food and Biosciences Institute could help to develop this field.

Green investment has multiple ‘wins’ but energy efficiency stands out for her. Some areas of England have focused on investing in home insulation, which not only helps the construction industry and reduces carbon emissions but prevents premature deaths among older people.

De Brún’s other priorities include securing a Peace IV funding package, supporting the Basque and Palestinian causes, and CAP reform. She is holding a series of meetings with farming and environmental organisations, and introducing them to Commission officials and ministers: “I’ll be following it every step of the way, amending the legislation to ensure we get the best deal possible with win-win solutions for farmers and the environment.”

As Europe continues to struggle with its financial crisis, she describes the EU as “still fairly resilient” and predicts a way out if the union promotes job creation and economic growth, and allows member states to do the same.

“If it continues in the way it’s going, we’re not going to get out of the crisis because more austerity, further centralisation of decision-making is, in my view, just making the problem worse,” she observes. However, growth can help to detoxify the banking system” and tackle sovereign debt.

A proper stimulus package could then be constructed. In her opinion, a recovering EU can help to green and modernise the economy, putting it on a stronger position against its emerging competitors.

Sinn Féin has stated its support for lowering corporation tax in Northern Ireland but, in contrast, its European colleagues are arguing for the opposite.

In November, GUE/NGL President Lothar Bisky criticised the Commission for not considering “increased taxation for banks, large corporations and the wealthy.” Back in 2007, German left-wing MEP Sahra Wagenknecht described low corporate taxes as “ever more unfettered … wild capitalism” which only benefitted a minority in society.

A Sinn Féin spokeswoman told agendaNi that because GUE/NGL is confederal group, “different MEPs and different parties in the group take different positions on a range of issues.” The positions taken by the group “are not binding on the component parties or MEPs.”