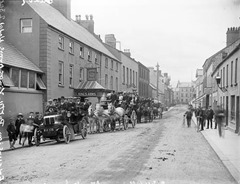 Peter Cheney looks back over the Larne and Howth gunrunnings, which marked the high point of the home rule crisis.

In the spring and summer of 1914, Irish unionists and nationalists alike were increasingly seeing the home rule crisis as intractable. Amid the rising tensions, the gunrunnings at Larne and Howth raised fears that Ireland was close to civil war.

The guns themselves were purchased by two determined figures: Fred Crawford (for the UVF) and Darrell Figgis (for the Irish Volunteers). Both were Protestants and well connected with the British establishment although their political views in Ireland sharply differed.

The Ulster Volunteer Force had been formed in January 1913 and this was followed by the formation of the pro-home rule Irish Volunteers in November 1913. Royal proclamations, published on 5 December 1913, banned the importation and the “carriage coastwise” of arms, ammunition and arms components into Ireland. Both landings clearly broke the law although both volunteer groups claimed that the guns were needed for self-defence.

Fred Crawford, a UVF officer and former army major, got in contact with Austrian and German arms manufacturers and the Ulster Unionist Council backed his plan in January 1914.

Crawford made his purchase (24,600 rifles and 3 million rounds of ammunition) through Bruno Spiro, a private arms dealer in Hamburg. The German Government was aware of the plan and turned a blind eye, well aware that it would cause trouble for Britain.

The weapons were initially loaded on to the SS Fanny on the Danish island of Langeland on 30 March. The boat escaped before it could be intercepted by customs officers and the British authorities became suspicious. SS Fanny transferred its cargo to the SS Clyde Valley off Rosslare on 19-20 April and the latter boat was renamed as the Mountjoy II – a reference to the ship that broke the siege of Derry.

Back in Ulster, the UVF mobilised its ‘motor corps’ and sealed off Larne on the night of 24-25 April while the guns were unloaded. Many residents of the town turned out to support the gunrunning and the Royal Irish Constabulary did not intervene, perhaps fearing violence if they acted.

Smaller caches of weapons were landed at Bangor and Donaghadee. The SS Clyde Valley then sailed back to Hamburg, where it collected the crew of the SS Fanny.

The British Government’s authority was seriously undermined. Nationalists were outraged by the failure to prevent the landing and were already suspicious of the British army after the Curragh mutiny.

The UVF was still under-armed with only one in four of its members having a rifle. Edward Carson moderated his rhetoric after the gunrunning as he was aware of the difficulties on the ground.

Events at Larne prompted hardline nationalists to go ahead with their own plans for importing arms for the Irish Volunteers. A much smaller quantity (1,500 rifles and 45,000 rounds) was bought by Figgis at Hamburg. The supplier was understood to be Moritz Magnus. These were transferred in the North Sea to two yachts, the Asgard and the Kelpie.

The Asgard landed on Howth harbour in daylight on 26 July and its 900 guns were transported away by supporters. British troops sent to retrieve the guns returned to barracks and fired on protestors at Bachelor’s Walk in Dublin city centre. Three civilians died and one man died later of his injuries. The soldiers were later censured by a commission of inquiry.

The Kelpie transferred its 600 guns to another yacht, the Chotah, which quietly landed them at Kilcoole, County Wexford, on the night of 1-2 August.

Public and political attention, though, quickly turned to the escalating crisis in Europe. Within days, Britain was at war and within weeks, Irish soldiers – from both communities – would be joining up to fight Germany on the Western Front rather than each other at home.

Winston Churchill condemned the Larne gunrunning as a “treasonable conspiracy” and questioned unionism’s commitment to the rule of law. However, the events of 1914 were overlooked after the war as the Government (including Churchill) needed to deal with both sides in order to reach a political settlement in Ireland.

Some of the Howth guns were used in the Easter Rising. The Larne guns were stored during the war and later released to the Ulster Special Constabulary.

Research by the unionist historian Jason Burke indicates that Bruno Spiro continued as a private arms dealer after the war. Spiro was arrested in 1936 for smuggling and tax fraud. A Jew, he was imprisoned in a concentration camp near Hamburg where he died (reportedly by suicide) in September of that year. 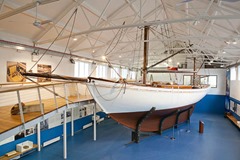 Magnus’ business was dissolved in December 1939 as his daughter was married to a Jew. He was then deported, with his family, to Auschwitz in 1944 and nothing further was heard of them.

As for the main boats, the Asgard is now preserved at Collins Barracks in Dublin. The Clyde Valley was later used as a trans-Atlantic merchant vessel. Ian Paisley brought it back to Larne in 1968 but the committee seeking to restore the boat ran out of funds and it was scrapped in Lancashire in 1974.

At the Larne centenary parade, unionist leaders stated that the ballot box is the only way to achieve political change in today’s society. The Howth centenary will be marked in July. A group of sailors plans to bring a flotilla of boats into Howth harbour and unload empty boxes as opposed to rifles.

Moderate perspectives from 1914 are often overlooked when its history is recalled. Some Protestant clergy objected to the militant tone within unionism and the mainstream nationalist leadership, under John Redmond, was pursuing its aims through Parliament.

NUI Maynooth historian Terence Dooley thinks that commemoration is, by its nature, selective but it is important for all sides in Ireland to remember those whose voices are forgotten. “It is no bad thing,” he has written, “that historians’ reappraisal of the events from 1912 to 1922 has probably taken public sympathy away from those who saw the gun in Irish politics as a glorious thing.”