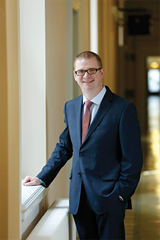 Six years after his election to Stormont, Simon Hamilton will now influence the whole Executive in his role as Finance Minister. Peter Cheney reviews his career to date.

A love of America and a traditional unionist upbringing are two of the main political influences on Northern Ireland’s new Minister of Finance and Personnel.

Born in 1977, Simon Hamilton grew up in Comber, where he now lives with his wife and two sons, and was schooled at Regent House Grammar School in Newtownards. He graduated from Queen’s University Belfast with a BA in modern history and politics and a postgraduate bachelor of legal sciences degree.

“I can’t remember a time whenever I wasn’t interested in politics,” he told agendaNi in 2008. “I couldn’t help but be influenced by the likes of Ronald Reagan and Margaret Thatcher and their low tax, small government, promotion of private enterprise and strong national security views.”

He added that he would enjoy having lunch with White House aides Ted Sorenson, Reagan aide Peggy Noonan and Karl Rove.

Hamilton’s first formal political role was as a member (and later Chairman) of the Queen’s Unionist Association, the UUP’s student branch which was mainly opposed to the Good Friday Agreement.

“I probably spent more time than I should have opposing it and its implementation than studying,” he commented. Brian Heading, a former communications officer in the Queen’s students’ union, says that Hamilton “cut his teeth” in student politics and wasn’t surprised that he became an MLA. To be Finance Minister at such a young age “says something good about the talent that we have ready and waiting to take over.”

After briefly working as an auditor with PwC, he joined the DUP press office and served as a councillor for Newtownards on Ards Borough Council between 2005 and 2011.

Elected to the Assembly for Strangford in March 2007, his maiden speech, unexpectedly, took place in a debate on illegal immigration in the USA.

“Anyone who knows me well will affirm that I have a long and abiding interest in the United States, particularly in its politics,” he remarked. “My love for that country is surpassed only by that for my own.” Hamilton said that removing 10 million illegal immigrants could put America at risk of “economic collapse” and he supported the Kennedy-McCain guest worker programme.

He chaired the Social Development Committee (2009-2011), ran the party’s last general election campaign, and was appointed as Sammy Wilson’s Assembly Private Secretary in May 2011.

Interviewed by this magazine in 2010, he described social security parity as a “safety net” for the vulnerable in society. “That’s my biggest fear, if we make a change, do we risk losing it?” he commented. “Even though your heart bleeds, if you make that change, you’re risking the whole system.”

The DUP permits conscience votes on animal rights and Hamilton voted for a ban on hare coursing in June 2010, while Jim Shannon voted against. He is very much one of the DUP’s new careerist generation recruited and mentored by Peter Robinson. Others include Christopher Stalford, Lee Reynolds, Gavin Robinson, Emma Lyttle, Timothy Johnston and Richard Bullick.

Despite learning their trade from the West Wing and practical high level politics, many of them are also members of the loyal orders. Hamilton is a member of the Orange Order and Royal Black Institution. He has also represented the fundamentalist Caleb Foundation in meetings with ministers.

Fellow MLA David McNarry recalls that Hamilton was “one of our prodigies” in the Young Unionist movement. He finds him to be “very genuine” and they share an interest in Formula 1, rugby and supporting the Comber Rec amateur football club.

“They are part of the DUP cloning machine,” McNarry says of the First Minister’s inner circle, “and they are very tactical in their thinking, very strategic in their thinking. I assume Robinson is planning his own exit and he wants to leave things as best as he can.” Hamilton “will be in a very strong position to make or break the next leader” when Robinson steps down and McNarry says that Sammy Wilson’s performance on the backbenches will be worth watching.

In his first ministerial speech, Hamilton stated: “The people of Northern Ireland won’t accept, and nor do they deserve, less with less. They deserve more with less.” He added: “Failure to reform in a way we choose and at a time of our choosing will see change forced upon us through circumstances.”

The Finance Minister, of course, is a highly strategic position in government. John Andrews (also from Comber) and Terence O’Neill moved on from the portfolio to become Prime Minister in the old Northern Ireland Parliament.

For his part, McNarry thinks that Hamilton has not thought so far ahead but would have been pleased (and perhaps surprised) to find himself in the Executive so soon. He wishes him well and adds: “The only way is up and there’s only one more job.”