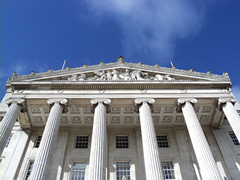 Mike Smyth’s recent article in agendaNi (issue 54, pages 40-41) challenges head-on our current liberal-democratic system of decision-making. He maps a stark picture, which he illustrates with colourful rhetoric and metaphor, of the disastrous consequences that populist or incompetent political decision-making has had on recent economic development. However, at the heart of Smyth’s argument lies a claim that I find deeply troubling: this is his assertion that so-called professional decision-making and management will lead to better outcomes than democratic decision-making.

According to Smyth, our current policy-making process, based on periodical elections, is not fit for purpose and requires fundamental reform. He contends that democratic decision-making should be replaced more widely by professional decision-making and management, to be undertaken by experts in the respective policy fields. In my view, such a claim profoundly misunderstands the nature and intrinsic value of the democratic process. It also misconstrues the relationship between politicians, citizens and experts.

The idea of a rule of experts has intrigued many political thinkers, stretching as far back as Plato’s dream of a polity governed by philosopher-kings. Clearly, politics may benefit from wisdom or expertise. But it is also, importantly, about the articulation and justification of interests, about the struggle over scarce resources, and about the defence of political values such as equality and justice.

Democratic politics is a contest of ideas; it thrives on argument, disagreement and lively debate, and it does not presume consensus in advance. In fact, this emphasis on debate and argument, which is characteristic of democratic politics, is also a key feature of professional discourses. Professionals do not agree on policy issues; one of the lessons of the current economic crisis is the lack of a consensus on the causes and solutions amongst experts. Moreover, relying on expert knowledge does not help us to adjudicate between competing expert diagnoses and recommendations. What is needed instead is political decision-making that is democratic, transparent and accountable to the citizenry.

Smyth’s suggestion to displace political decision-making on to experts, disguises the fact that knowledge and expertise can be profoundly political tools. Professional decision-making is underpinned by ideological commitments; experts are not detached from vested interests, and there is no guarantee that their decisions will benefit the citizenry. In fact, it could be argued that expert and professional opinion already holds too much sway, and that such sectional and undue influence on the political process should be limited.

Curiously, while Smyth understands our current economic crisis as a political crisis, triggered by populist, incompetent, even corrupt politicians who have failed to implement and oversee appropriate forms of regulation, he also seems to advocate more deregulation and transfer of power from politicians to experts. But where will this leave us? Will it leave the bankers in charge of regulating the banking system?

Democracy has many flaws, but it remains wedded to the principles of equality and participation, and to the legitimacy and accountability of the decision-making process. It gives citizens a stake in the exercise of political power, and this makes it superior to the rule of experts and professional élites. And while I agree with Smyth on the need to reform our current democratic system, I would argue that what we need is more democracy, not less. What we need is a public conversation about the shape and format of democratic politics, about the nature and extent of civic input, and about the policies we want democratic politics to deliver. In other words, we need democracy.